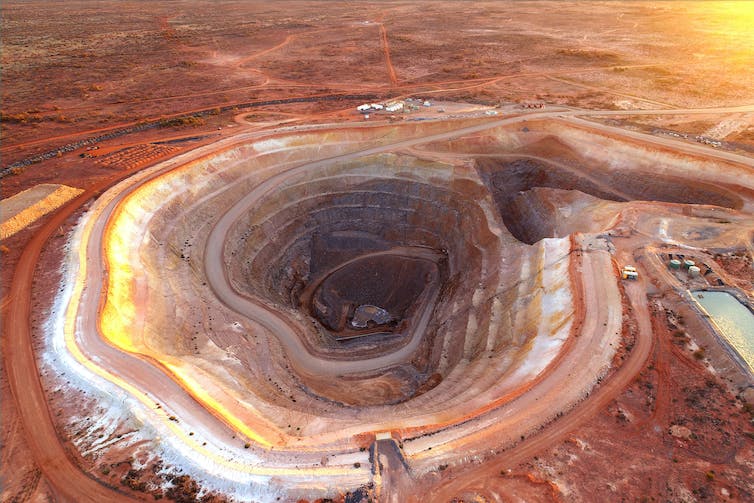 Mining accounts for about half of Australia’s exports. In terms of ‘economic complexity’, the nation ranks 59th in the world, between Kazakhstan and Lebanon. Shutterstock

It's the only way to save Australia from a deep hole, but innovation policy is missing in action

Three years ago, then prime minister Malcolm Turnbull went to an election spruiking the wonders of innovation. “There has never been a more exciting time to be an Australian,” government advertising had enthused in the months before.

But the public wasn’t enthused, and Turnbull’s government barely scraped back into office.

Since then innovation policy has spooked the political class. They see it as a vote loser, and a threat to jobs – mostly their own.

Consequently, innovation and industry policy has received the least attention just when the decline of investment in research and development may matter most to our economic future. 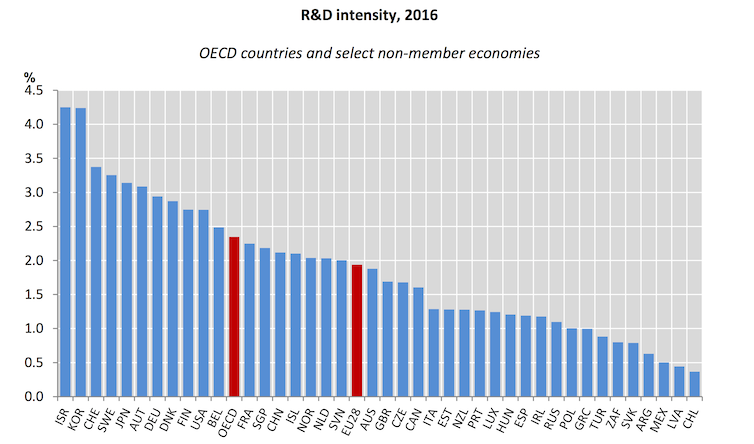 The red bars show the average intensity of the member states of the OECD and the European Union. Data for Argentina, Australia, New Zealand, Poland, Switzerland, Turkey, and South Africa is from 2015; data for Singapore is from 2014. OECD Main Science and Technology Indicators Database

Here’s how we got to where we are.

After the terms of trade downturn of the 1980s and the economic reforms of the 1990s, Australia enjoyed the biggest, unanticipated mining boom in our history, thanks to the rise of China. John Howard wanted us to be “relaxed and comfortable” and we were, at least while it lasted.

Increased commodity prices boosted our terms of trade, without any extra effort on our part. By contrast with Norway, which prepared for its post-oil future with a 76% resource rent tax and sovereign wealth fund, Australians enjoyed tax cuts and a spending splurge.

However, the underlying structural problem of our economy had not gone away. Measured by the research intensity of our exports, Australia’s “economic complexity” ranks at 59, between Kazakhstan and Lebanon.

This index compiled by MIT’s Observatory of Economic Complexity is topped by Japan, Switzerland and Germany. Our position in global innovation rankings is no less dismal, especially when it comes to turning ideas into products.

While recent domestic growth has been driven by services, retail and construction, our future living standards will depend on how we pay our way in the world. This means identifying new, more sustainable sources of export income.

Of course, resources will still have a part to play, but not as unprocessed raw materials. For example, we have everything we need for renewable energy production, battery manufacture and hydrogen exports. And how could anyone contemplate continuation of the barbaric live animal trade?

The graphic below shows Australia’s export profile in 2017. Of US$244 billion in total exports, US$131 billion were mineral products.

This rebalancing won’t happen automatically through the market. It will require active intervention to manage the post-mining boom transition to an inclusive and dynamic knowledge-based economy. And to reverse the slowdown in productivity growth associated with current wage stagnation.

Too obvious to ignore

During the boom, high prices for coal and iron ore masked Australia’s deteriorating productivity performance. Now mining no longer contributes to growth, the impact on our national income has become all too obvious.

That’s why it was so important to Malcolm Turnbull to reinvigorate the national innovation and science agenda with a focus on startups and business-university collaboration, after Tony Abbott’s $3 billion cuts to Labor’s programs.

And why it was then so disappointing he could not build on his agenda for an “ideas boom” to replace the mining boom.

The Coalition government has cycled through three prime ministers and six industry ministers. It continues to cut science and innovation programs. Its latest budget “savings” included $4 billion from the Research and Development Tax Incentive scheme, $3.8 billion from the Education Investment Fund and $2.2 billion from higher education.

As a result, Australia’s total spending on research and development is now just 1.88% of GDP, from 2.11% five years ago. The government contribution (0.57%) is where it was in the 1980s. Meanwhile Japan and Sweden are committing more than 3%, and Korea and Israel more than 4%.

Read more: Profiting from the innovation of others? Why governments must manage the spoils of new ideas

For any mention of innovation and industry policy in the current election campaign, you have to look hard.

The Coalition has confined itself to some low-key announcements on a new space agency, defence innovation, genomics, food, marine science and manufacturing.

It has rejected or parked the recommendations of its own Innovation and Science Australia 2030 strategy, including using any savings from winding back the R&D Tax Incentive to promote high-growth export opportunities.

Labor has committed to a “collaboration premium” to encourage business engagement with universities and the CSIRO as part of a restructured R&D Tax Incentive (another key recommendation of the 2030 strategy).

However, it will also “bank” the Coalition’s savings to achieve its budget surplus. In this context, it will be all the more challenging for a new Labor government to achieve its R&D target of 3% of GDP, given that this will require additional investment of at least $20 billion.

These initiatives are clearly worthwhile, but do not restore the funding that has been lost, let alone increase it.

If new policy must be paid for, why not cut expenditure that actually impedes economic transition? The diesel fuel tax rebate, for example. This $6 billion scheme, whereby taxpayers subsidise fuel costs for the resources sector, is equivalent to almost half the entire annual budget outlay for research and innovation.

Most successful economies around the world use “knowledge foresights” to identify national priorities in areas of existing or potential competitive advantage. They have long-term, coherent policy frameworks for pursuing these priorities.

Read more: Five things about innovation Australia can learn from other countries

Australia’s next government will have a chance to devise such a framework, in cooperation with business, unions and research organisations. Of course, it will require substantial public as well as private investment. But we can no longer afford a “do nothing” approach.