Images of mourning and the power of acknowledging grief

The Western world has an unwritten rule that says grief should be private. 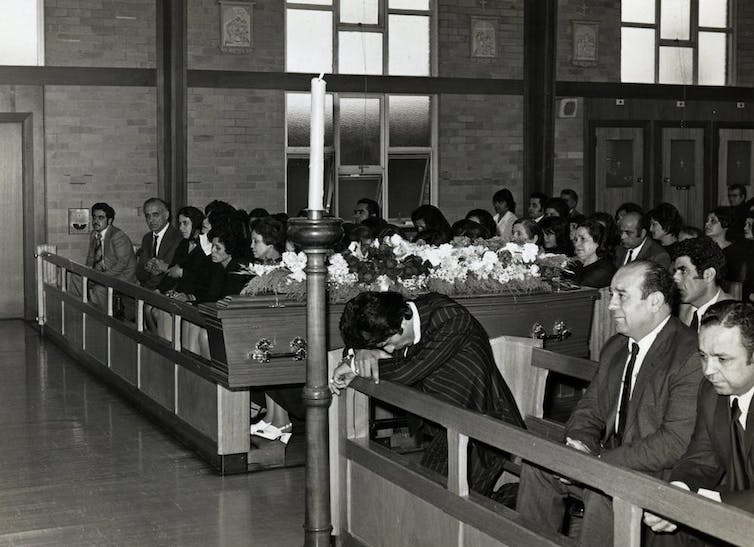 These images of Cherine Fahd’s grandfather’s funeral were tucked away in a brown paper envelope for decades. As a society, we too often keep grief hidden from view. Author provided

Before her death in 2010 my paternal grandmother gave me a box of family photographs. It contained mostly black and white images taken between 1950 and 1975.

As a child I had often sorted through these photographs, intrigued by what they portrayed of my family’s migration from a small village in Lebanon to the southern suburbs of Sydney. I was especially fond of seeing my father as a small boy, climbing trees or riding go-karts in what was still our street in Peakhurst. 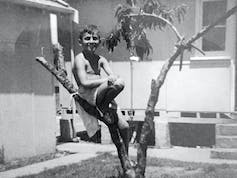 Snapshot of Fahd’s father as a boy circa 1957. Author provided

One person in the photographs intrigued me more than any other – my grandfather, who I knew I had met as a baby but had no recollection of. I knew the story of his death was a sad one, but I didn’t appreciate just how sad it had been until I saw it captured in a set of extraordinary photographs I discovered in that box.

On arriving home with my grandmother’s heirlooms, I was keen to reconnect with my family’s history. It had been over 20 years since I had seen these photos. Rummaging through the box, I noticed a crumpled envelope made of aged brown paper hidden beneath those familiar images. Inside were 24 carefully hand-printed, black and white shots. 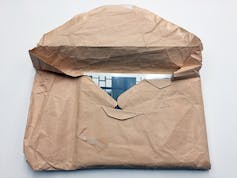 The original photographs as they were found in their envelope. Author provided

These images took my breath away. They made me weep. My first impression was that they were so desolate, yet, they were beautiful, accomplished and unique in what they represented.

Taken on October 29, 1975, these photographs documented the funeral and burial of my paternal grandfather.

On an ordinary evening of October 26, my grandfather was hit by a car in front of his house. He died the next day in hospital and was buried at Rookwood Cemetery in Lidcombe. Captured in the photographs was my family deep in mourning; expressing their grief physically, in an ever-so public way. 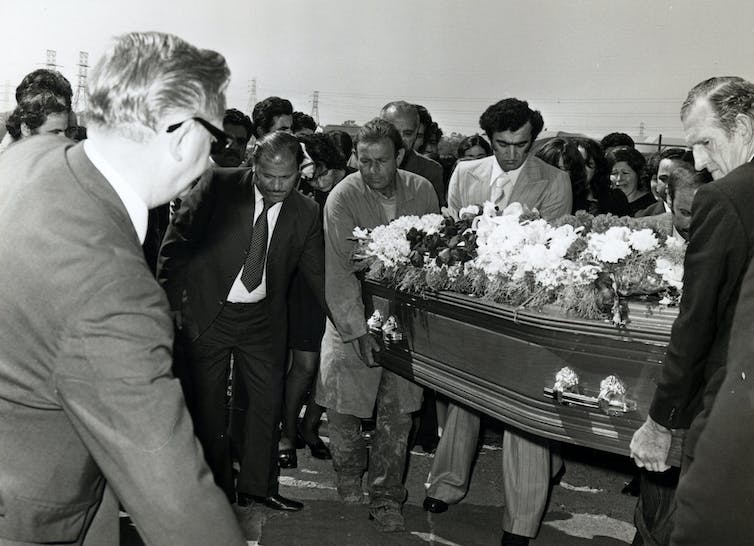 The burial at a Sydney cemetery in 1975. Author provided

The images were hard to look at. Difficult because they revealed my father’s grief, which had remained hidden for over four decades. He was a young man, only 26 at the time. They also showed my mother, a young woman of 24, with weary eyes hidden behind dark, “Jackie O” sunglasses. She was heavily pregnant with my sister who would be born two weeks later.

Inescapably, they revealed my grandmother’s trauma. Despite living with my family for 28 years, she had never discussed her loss or this day with us. 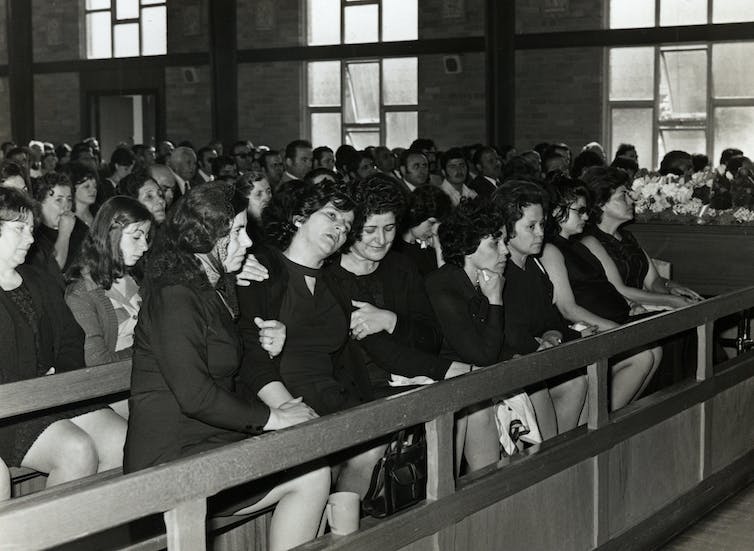 The photos reveal the author’s grandmother’s grief at losing her husband. Author provided

The photographs also showed the cultural customs of grief; an entire Lebanese community dressed in mourning clothes, the customary black attire creating a scene that can be likened to a Hollywood Mafia film or a Fellini production.

What I was witnessing in these photographs was an experience I knew had really taken place and yet the precision of these images – their characters, costumes, scenes, plot and the frozen emotions – were perfectly staged, as though a masterful director were pulling the strings, creating the scenes of death’s sorrow.

After carefully studying the photographs in the privacy of my room, I decided to hide them in a drawer under my bed. This is where they remained for the next seven years. I knew that by hiding them I would continue my grandmother’s legacy of keeping them private.

In late 2017, I felt a scholarly urge to study these photographs, and from their hiding place I sought them. I also searched for other funeral photographs, looking in online archives, institutional collections such as Trove, and at sellers flogging vintage images on eBay.

I asked family and friends whether they had seen photographs such as these and whether it was common practice in the 1970s to photograph funerals. My search yielded no results.

I decided to ask my father. He admitted he knew of the photos but had forgotten about them – he was glad I had them. I offered to show them to him but warned they were upsetting. 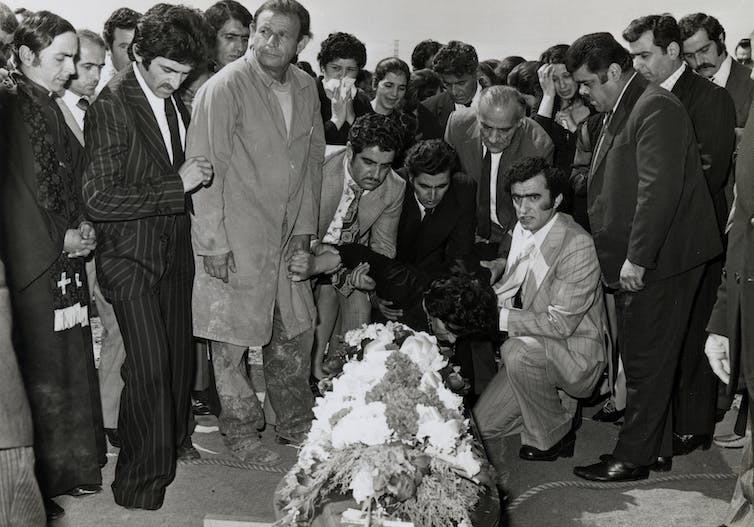 The images look like something out of a Fellini film. Author provided

In the end, we sat around the kitchen table and looked at them. I asked questions and he shared stories. He did not remember who the photographer was, thinking a friend of the family took them but not recalling much else.

Later, his elderly uncle who also features in the photographs would remember a first name, perhaps Jilal, perhaps a friend of my grandfather’s but not from “our” village.

Despite my desperate need to know who took these images and why, I never spoke to my grandmother about them. After all, she had given them to me and, in a way, covertly indicated that she did not want to talk about them. 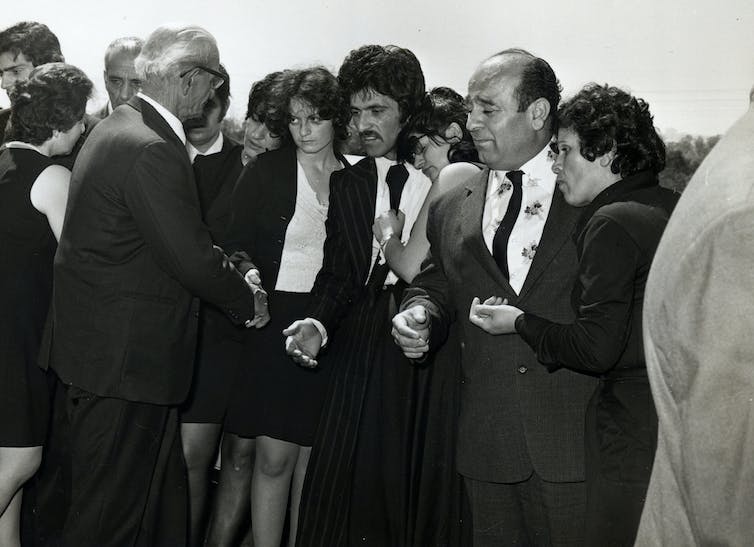 Fahd eventually shared the images with her father. Author provided

Around the same time that I shared the photos with my father, I showed them to a friend and curator I had worked with in the past, Daniel Mudie Cunningham. I knew he had a personal and professional interest in grief as well as a fascination with family snapshots. It was through our conversations and the process of writing that I began to consider the possibility of making these images public.

After consulting my father and gaining his consent, I sought to make this very private story and our intimate family photographs into artwork for the exhibition that Daniel would curate at Carriageworks for The National 2019: New Australian Art. I titled the artwork Apókryphos which comes from the Greek to mean “hidden, concealed, obscure”.

The tension of the unseen

Photography and death have long been acquainted. The most influential photographic text ever written, Roland Barthes’ 1980 work Camera Lucida was a nod to this pairing. Written in the wake of Barthes’ mother’s death, the philosopher reflects on a private photograph of his mother as a young child.

This photograph, which he refers to as the “Winter Garden” becomes an object of mourning, from which he may find his mother, reclaim her and assuage his loss. Despite devoting half the book to the Winter Garden photo, he never shows us the image. 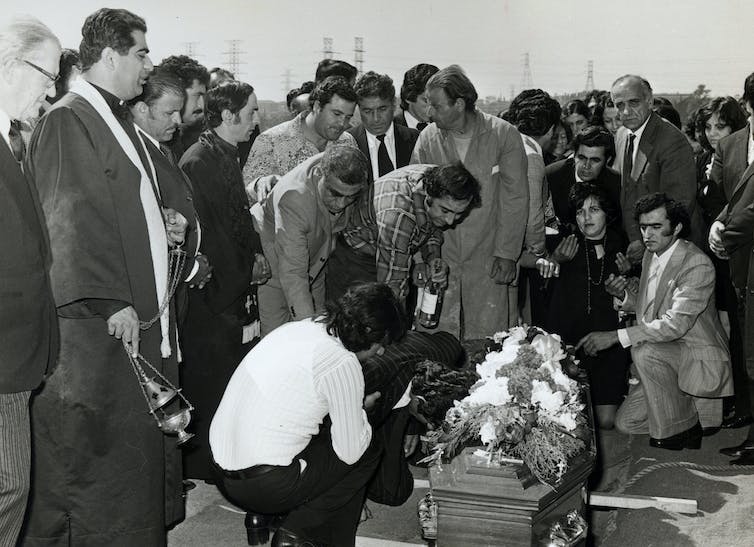 Cherine Fahd’s father reaching down to his father’s coffin. Her grandmother is being held up by friends. Author provided

We also never see the photographer. What we do see however, is what we rarely ever see in the West: a person openly and publicly grieving; grief outwardly expressed in the body and face, and all the other emotions that follow it – anger, fear, melancholia, depression.

There is an unwritten contract that grief is private. Even in the family album it is kept hidden. These albums create our ancestral mythology. They are filled with photographs celebrating the happy times and the high points in our lives. My family albums portray and celebrate our moments of togetherness; birthdays, holidays and weddings as well as ordinary moments of domestic life.

But what of death? What of images of grief and loss? Where is their place in the family archive? While many in the 19th century had a fascination with post-mortem photography or “mourning portraits”, these focused on the deceased. Rarely seen in the family album are photographs of funerals, burials and the suffering of those who are left to mourn. 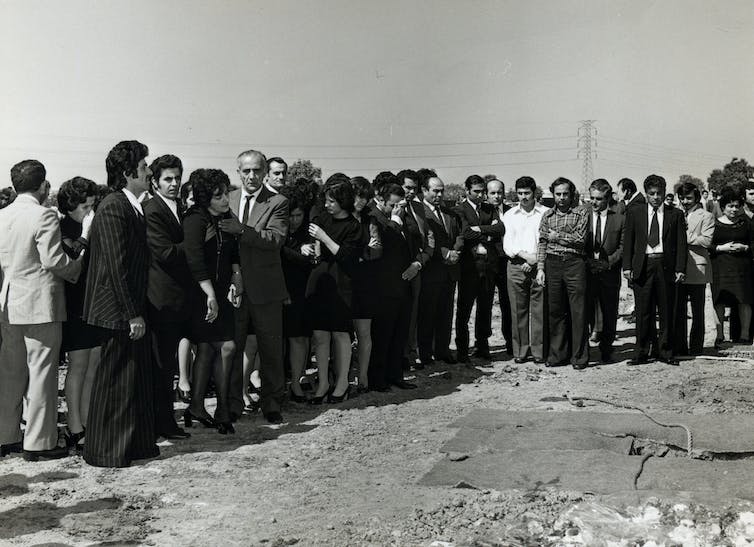 The Western world has an unwritten rule that says grief should be private. Author provided

Showing these photographs and telling their story is a provocation in a culture that is afraid of revealing grief. My project has helped me and my family to reconcile the unhappy moments with the happy ones. I have shared them with my siblings, my uncle and cousins, and with my children, who will one day share them with their children.

Through sharing these photographs, we re-visualise our family album to include more difficult images, and to reflect a life that makes a place for difficult stories and difficult emotions.

I now share them with you. Collectively we can move toward acknowledging the grief that is pictured in these and all the other hidden moments of mourning.

Cherine Fahd’s photo series Apókryphos (2018–19) is on display at Carriageworks in Sydney as part of The National 2019 from March 29-June 23. The book Apókryphos will launch at Carriageworks May 4 and is published by M.33 Melbourne.