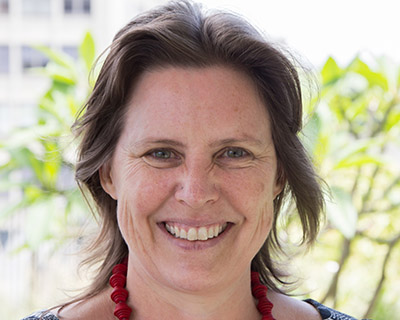 Shona has extensive experience in developing and implementing strategic plans, management and governance. She has a PhD in microbiology, and has been investigating the medicinal properties of honey for over 15 years. Shona has moved from research focused roles to management and was the inaugural CEO of the Wheen Bee Foundation, which is a not for profit charity, established to raise awareness of the importance of honey bee health and food security.

Shona joined UTS in 2015 as the manager of the ithree institute (infection.immunity.innovation). The researchers of the ithree institute use pioneering science to provide new insights into how microbes adapt and survive in their hosts and the environment, to reduce the morbidity and mortality caused by infectious diseases, and to slow down the rise of antimicrobial resistance. Shona works closely with the director to develop and implement ithree’s strategic plan, and the institute’s researcher leaders to support their common goals, as well as other key internal and external stakeholders. She also manages the administrative, financial and technical operations of the ithree institute.
Shona retains an interest in medicinal honey research, and also holds the role of Vice President for the NSW Apiarists’ Association.

Manuka honey, derived from the New Zealand flowering plant Leptospermum scoparium, shows promise as a topical antibacterial agent and effective chronic wound dressing. The aim of this study was to determine the non-peroxide antibacterial effects of this

There is an urgent need for new, effective agents in topical wound care, and selected honeys show potential in this regard. Using a medical-grade honey, eight species of problematic wound pathogens, including those with high levels of innate or acquired antibiotic resistance, were killed by 4.0-14.8% honey, which is a concentration that can be maintained in the wound environment. Resistance to honey could not be induced under conditions that rapidly induced resistance to antibiotics. Escherichia coli macroarrays were used to determine the response of bacterial cells to a sub-lethal dose of honey. The pattern of gene expression differed to that reported for other antimicrobial agents, indicating that honey acts in a unique and multifactorial way; 78 (2%) genes were upregulated and 46 (1%) genes were downregulated more than two-fold upon exposure to the medical-grade honey. Most of the upregulated genes clustered into distinct functional regulatory groups, with many involved in stress responses, and the majority of downregulated genes encoded for products involved in protein synthesis. Taken together, these data indicate that honey is an effective topical antimicrobial agent that could help reduce some of the current pressures that are promoting antibiotic resistance.