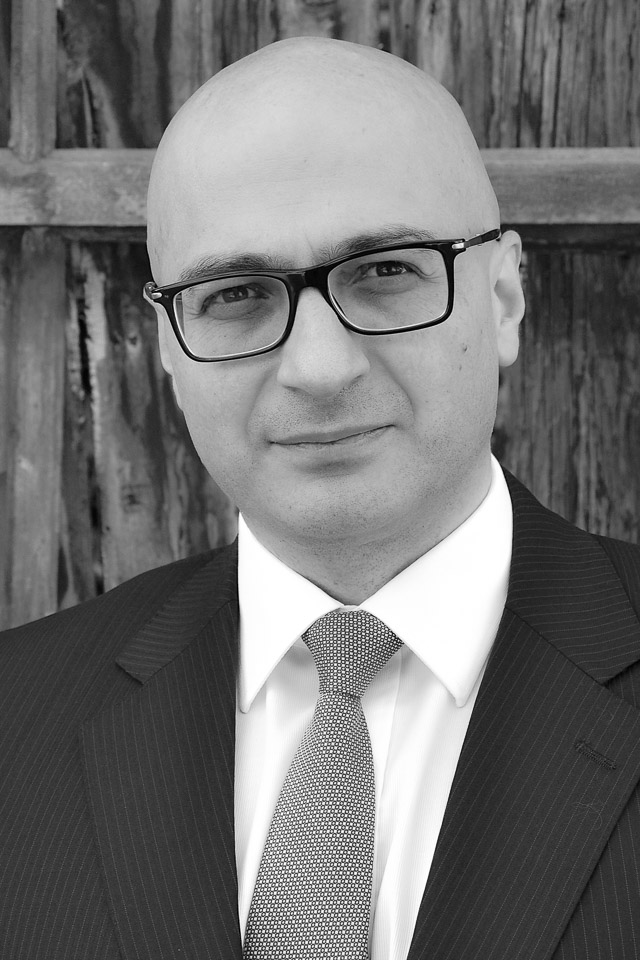 Between the years 2008 – 2017 he worked Europe where he was faculty member (2008-13) and Director of the Spatial Audio Research Group at the Digital Media and Arts Research Centre (DMARC) – University of Limerick. He was also the co-founding member of the Film Academy, University of Goce Delchev – Shtip (2013), and served as the Film Academy’s Associate Dean and was an Associate Professor of Sound and Music. Prior to starting at UTS he was a Scientific Researcher and Associate Professor in 3D Sound at the Fraunhofer Institute (IIS), International Auditory Laboratories – Erlangen and Project Coordinator of the European Commission ‘Horizon 2020’ funded ORPHEUS Project which investigated the production chain of object-based audio.

Composers of electroacoustic music have developed and creatively implemented various spatialization techniques for multichannel loudspeaker setups. What is not known is which of these spatialization techniques is most effective for exploiting the extended creative possibilities available in multidimensional sound. This article discusses an experiment investigating the perception of the spatial attributes of "envelopment" and "engulfment" within a high- density loudspeaker array. The spatialization techniques used in the experiment were timbre spatialization, spectral splitting, amplitude point-source panning, and dynamic spectral subband decorrelation. Three loudspeaker setups, or spatial dimensions, were investigated: horizontal-only; elevated-only; and three-dimensional, which consisted of both horizontal and elevated loudspeaker setups. Results suggest that dynamic spectral subband decorrelation was perceived as both the most enveloping and the most engulfing technique when compared to other techniques in these experimental loudspeaker configurations. We propose that the experimental results can be successfully implemented when composing electroacoustic music to exploit the creative possibilities in a high-density loudspeaker array or in other multichannel loudspeaker configurations.

Hyper-compressed popular music is the product of a behaviour associated with the over-use of dynamic range processing in an effort to gain a competitive advantage in music production. This behaviour is unnecessary given the introduction of loudness normalisation algorithms across the industry and has been denounced by mastering engineers as generating audible sound quality artefacts. However, the audibility of these sound quality artefacts to mastering engineers has not been examined. This study probes this question using an ABX listening experiment with 20 mastering engineers. On average, mastering engineers correctly discriminated 17 out of 24 conditions suggesting that the sound quality artefacts generated by hyper-compression are difficult to perceive. The findings in the study suggest that audibility is suggested to depend on the crest factor (CF) of the music rather than the amount of CF reduction thus proposing the existence of a threshold of audibility. Further work focusing on education initiatives are offered.

The following paper presents an experimental design for the perceptual study of multi-channel
electroacoustic music, with emphasis on the contribution of elevated loudspeakers to the spatial
attributes of envelopment and spatial clarity, and the proposed attribute of engulfment. Further, an
argument for an ecologically valid experimental design is presented leading to a novel perceptual
experimental method in the way various perceptual factors are controlled. The term spatial scene is
defined and the factors contributing to its construction are discussed. In the process, an argument is
presented for the use of complex stimuli, division of the audio frequency range and the use of varying
levels of sonic complexity. The experimental loudspeaker configuration used for the proposed study is
discussed with reference to research on psychoacoustics and established multi-channel loudspeaker
standards. Problems encountered in the initial listening test are discussed and the results of the pilot
experiment are presented.

While the LUFS standard was originally developed for broadcast applications, it offers a convenient means of calibrating program material stimuli to an equal loudness level, while remaining in a multichannel format. However, this calibration is based on an absolute sound pressure level of 60 dBA, the preferred listening level when watching television. Levels used in analytical listening and perceptual experiments tend to be significantly higher. This disparity may affect the accuracy of the Leq(RLB) weighting filter employed in LUFS meters. To address this issue, the development of the LUFS standard is examined to assess its suitability for the task. The findings suggest that a compromise between analytical listening and loudness matching in perceptual experiments requires careful consideration of experimental variables.

Object-based media is a revolutionary approach for creating and deploying interactive, personalised, scalable and immersive content. This allows media objects to be assembled in novel ways to create new and enhanced user experiences. Orpheus will develop, implement and validate an object-based end-to-end media chain for audio content. The partners will lay the foundation for facilitating infinite combinations of audio objects in ways that are flexible and responsive to user, environmental and platform-specific factors. This includes innovative tools for capturing, mixing, monitoring, storing, archiving, distributing, playing out and rendering of object-based audio. To further foster the development of new capabilities in the European content creation industry, ORPHEUS is working on a reference architecture and guidelines on how to implement object-based audio chains. An overview of the project, the challenges and first results will be presented in this paper.

The paper reports on an experiment designed to examine
the perception of the spatial attributes of envelopment
and engulfment in spatial techniques used in multichannel
electroacoustic music. Four spatial techniques
were examined, they were: (i) Timbre Spatialisation [1],
(ii) Spectral Splitting [2], (iii) Amplitude Point Source
[3], and the proposed (iv) Dynamic Spectral
Spatialisation technique. The multi-channel loudspeaker
configuration consisted of 16 loudspeakers, eight
horizontal and eight elevated. The experiment was
design whereby the four above mentioned spatial
techniques were presented in three conditions: (i)
Horizontal only, (ii) Elevated only, and (iii) Horizontal
and Elevated, referred to as Three Dimensional (3D),
loudspeaker configurations. The experiment took place
in the Spatialisation Auditory Display Environment
(SpADE) at the University of Limerick and has physical
attributes that conform to the ITU-R BS.1116-1 listening
room standard [4]. Each participant individually
undertook a listening experiment whereby they were
asked to evaluate each spatial technique presented in the
three conditions for perceived levels of envelopment and
engulfment. A factorial analysis of variance (ANOVA)
was performed on the envelopment and engulfment
ratings. The results of the analysis revealed a significant
main effect for spatial techniques and loudspeaker
configurations for both spatial attributes. Participants
rated the Dynamic Spectral Spatialisation technique
highest for levels of envelopment and engulfment. The
Horizontal loudspeaker configuration was rated highest
for envelopment and the Elevated loudspeaker
configuration was rated highest for engulfment.

This paper considers the use of subwoofers in a multichannel loudspeaker configuration, as there is a current trend to utilise this dedicated low frequency speaker in multi-channel electroacoustic music. Research into perception of subwoofer localisation is reviewed, establishing that there has been relatively little research investigating subwoofer perception in a concert-hall environment. The paper presents the results of an ecologically valid subwoofer localisation experiment run in a concert-hall environment, the results of which suggest that azimuth localisation is possible, however elevation localisation is not. The possible implications of the experiment for proposed surround-sound multi-channel standards and for multi-channel electroacoustic music are discussed. © July 2009- All copyright remains with the individual authors.

The composition Sveti Kliment (2007) implements various spatialization techniques based on perceptual research and psychoacoustics. These include techniques to exploit the elevated loudspeakers within the multichannel setup in the Sonic Lab of the Sonic Arts Research Centre (SARC), Queens University, Belfast. The aim was to generate a sense of being covered by sound—engulfed, and not simply enveloped ("surrounded by sound"). The composition was inspired by Saint Clement of Ohrid (ca. 840–916 CE), patron saint of Ohrid, the Republic of Macedonia, and the Macedonian Orthodox Church, whose life was committed to research, teaching, and improving the lives of those in his diocese. He was considered the most learned of Saint Cyril's and Saint Methodius's disciples, and he not only improved the Cyrillic alphabet, but was also a prolific writer and translated various texts using the Cyrillic script. In 886, he established in Ohrid a center of higher learning, best described in modern terms as a university, which during its existence taught literature, language, medicine, music, art, and agriculture to over 3,500 students.

The recording was undertaken in the Sonic Lab at SARC. The Neumann KU100 dummy-head microphone was used for the recording and positioned in the "sweet spot" of the audience seating area. The KU100 was set up at a height of 120 cm to reflect the average height of a seated person. The acoustic panels in the Sonic Lab were lowered to create a reverberation time RT60 of 0.2 sec as used in electroacoustic music concerts such as the Sonorities Festival of Contemporary Music. The recording was done by the composer and recorded using a Digidesign Digi 002 interface and Digital Performer software.

Blagoveshtenije 07.04 (2013) is the third and final
composition of a trilogy that consists of Bogorodica
28.08 (2005) and Deva 21.09 (2009), which addresses
important dates in the Orthodox calendar attributed to
the Mother of God. As with the other compositions in
the trilogy, Blagoveshtenije 07.04 incorporates both
sacred and secular influences. Various traditional
instrumental timbres and rhythms, along with
Macedonian Byzantine vocal manipulations form the
sonic basis for the work.

Conference workshop on the composition and spatialization of music in a 22.2 loudspeaker configuration