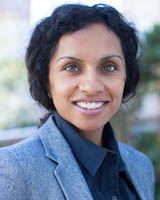 A graduate of New York University School of Law (LL.M) and the University of New South Wales (Ph.D, LL.B/B.A), Dr Vijeyarasa is a Chancellor's Post-Doctoral Research Fellow in the Faculty of Law at UTS. She is the Chief Investigator behind the Gender Legislative Index. Dr Vijeyarasa's research pivots around gender and human rights. Her current research focuses on strengthening accountability for women’s rights at the domestic level. It particularly seeks to advance the gender responsiveness of domestic legislation by providing benchmarks for the drafting of new laws and for evaluating existing ones on the basis of global human rights commitments.

In 2019 Dr Vijeyarasa piloted the Gender Legislative Index in Indonesia, the Philippines and Sri Lanka  evaluating laws passed under the leadership of women in executive office, with the goal of exploring the legislative footprint of women presidents and prime ministers.

Before joining UTS, she held several positions on women’s rights issues in international organisations, non-profits and international NGOs. Dr Vijeyarasa’s international human rights activism included advancing anti-trafficking victim reintegration networks in Vietnam and Ukraine, filing briefs before the European Court of Human Rights, the Supreme Court of Moldova and the Supreme Court of the Philippines, making submissions to UN treaty bodies and overseeing research and programming on women and youth in urban spaces. This rich experience informs her impact-driven approach to research, where sound methodologies are created to deliver tangible societal change in order to improve our lives through the law.

Dr Vijeyarasa is the author of Sex, Slavery and the Trafficked Women: Myths and Misconceptions about Trafficking and its Victims (2015) and more than twenty other peer-reviewed publications on law and gender issues. She has appeared on the media in several countries (TV and radio) and was one of the leading contributors to the Reproductive Health Reality Check blog, sponsored by the United Nations Foundation.

Ramona has won a number of academic awards and fellowships. This includes the United Association of Women Prize in the School of History and an NYU International Law and Human Rights Fellowship. In 2019 she received a UTS Law Research Seed Grant. She has lived and worked on every inhabitable continent.

Ramona is admitted as a legal practitioner in New South Wales and the Supreme Court of the State of New York. Prior to joining UTS, Ramona worked as an international women’s rights lawyer for ActionAid International (in Nicaragua, Ghana and Belgium), the International Organisation for Migration (in Vietnam and Ukraine), the Centre for Reproductive Rights and the International Centre for Transitional Justice (both in New York).

Ramona has won a number of academic awards and fellowships. This includes the United Association of Women Prize in the School of History and an NYU International Law and Human Rights Fellowship. In 2019 she received a UTS Law Research Seed Grant. She has lived and worked on every inhabitable continent.

Vijeyarasa, R 2015, Sex, Slavery and the Trafficked Woman Myths and Misconceptions about Trafficking and its Victims, Routledge, UK.View/Download from: UTS OPUS

Overall, this text provides readers of migration and development, gender studies, women’s rights and international law a comprehensive and multidisciplinary analysis of the concept of trafficking.

Vijeyarasa, R 2020, 'CEDAW’s General Recommendation No. 35: A quarter of a century of evolutionary approaches to violence against women', Journal of Human Rights, pp. 1-15.View/Download from: UTS OPUS or Publisher's site

Vijeyarasa, R 2019, 'A move in the right direction? The Model Law against Trafficking in Persons and the ILO Operational Indicators', International Migration, vol. 57, no. 1, pp. 177-191.View/Download from: UTS OPUS or Publisher's site

This article is premised on the fact that every area of law needs a gender perspective. It discusses the prospects for a Gender Legislative Index, a tool to enable us to evaluate and score legislation, by placing laws on a scale from gender-regressive to gender-responsive, when set against global benchmarks from international law – primarily CEDAW. In doing so, this article defines and defends the need for gender-responsive legislation, showing how a common set of standards for global good practice can be developed and the shortcomings, but also advantages, of an online tool to benchmark, score and rank laws.

Vijeyarasa, R 2018, 'Women leaders in a man's world: A glimpse into Australia's foreign policy under Gillard - Part I', Center for Feminist Foreign Policy.View/Download from: UTS OPUS

Women make the world a better place for other women. Or do they? Some maintain that a woman in the top job will mean a brighter future for fellow women. However, we cannot even accept at face value the assumption that women leaders are good for women. This two-part series explores the case of Julia Gillard, Australia’s first and thus far only female Prime Minister (from 2010-2013), regarding the issue of women’s rights in her domestic and foreign policy agenda. Vijeyarasa discusses.

Slavery and trafficking in persons continue to draw global attention,
fostering debates in sociological, political, academic and legal circles.
Governments, in particular, value being seen on the global stage as working
to combat the trafficking of human beings to and from their territories. With
prosecution of traffickers difficult in many jurisdictions, civil society
organizations and others always welcome efforts by regional courts to hold
governments accountable for their failure to fulfil their counter-trafficking
international obligations, or those by domestic courts to find traffickers
guilty

Ramona Vijeyarasa explores the issue of gender equality in Vietnam and argues that the picture is far more complex than one of rapid advancement towards attainment of Millennium Development Goal (MDG) 3. She shows that when data is disaggregated and progress is measured against other international standards - including those set out in the Convention on the Elimination of Discrimination against Women and global commitments made at the United Nations (UN) Conference on population and development in Cairo and women in Beijing - greater investment, both financial and human resources, and increased political will, are needed well beyond 2015. Vijeyarasa examines Vietnams achievements and shortfalls as measured against the MDGs with an eye to the potential for institutional reform of gender machinery at the national and international levels in order to create stronger accountability for the rights of Vietnamese women and progress towards womens empowerment.

Bello y Villarino, JM & Vijeyarasa, R 2008, 'The international implications of the European consensus against the death penalty: The obligation of the EU to protect European citizens abroad from execution', Journal of European Studies, Universitas Indonesia,, vol. 4, no. 2, pp. 58-73.

The exploitation of migrant women abroad through trafficking and
trafficking-like conditions is a global phenomenon. The purpose of this
chapter is to highlight similarities and differences in the main barriers that
exist to counter the traffic of women through a comparative study of
Vietnam, Ghana and Ukraine. This chapter is based on fieldwork carried
out in the three countries from July 2009 to November 2010, including 52
interviews with key informants and first-hand data collected from 109
returned victims of trafficking. This research identifies the political, legal,
socio-cultural and economic road-blocks that continue to hinder efforts to
counter trafficking using a human rights and migration-centred framework
in all three research countries.
Governments, NGOs and other stakeholders have been engaging in
counter-trafficking activities for years, particularly since the enactment in
2000 of the UN Protocol to Prevent, Suppress and Punish Trafficking in
Persons, Especially Women and Children (Trafficking Protocol). The
Protocol specifically calls for a “comprehensive international approach” to
“prevent and combat trafficking in persons” (Preamble). Nonetheless, an
array of barriers to combating trafficking exists, ranging from
shortcomings with national trafficking laws and access to justice for
victims, to the reality that some governments fail to play an active and
positive role in the countering of trafficking. In other instances, negative
perceptions held about individual victims or their own unwillingness to self-identify as a trafficked person, present obstacles. An on-going
emphasis on a criminal justice rather than human-rights centred approach
is an overarching challenge.
In this chapter, I focus on three key issues:
(a) The impact of criminalisation of sex work and stigma associated with
both sex work and trafficking;
(b) Stereotypes concerning who constitutes a victim of trafficking; and
(c) The role of cultural attitudes and myths concerning the “...

Vijeyarasa, R 2019, 'A 20 year struggle: The outcomes of a 25% quota for women in local government in Sri Lanka', Women in Asia Conference: Women in an era of anti-elitism, University of New South Wales.

As of August 2015, only 18 women leaders worldwide had reached the highest level of elected office. Contrary to expectations that women leaders will promote the interests of fellow women, it is a misconception and arguably an unreasonable expectation that a woman leader will necessarily want to promote the rights and interests of women. Moreover, many such leaders are plagued by an embedded culture of “institutional masculinity” in most parliaments, making it difficult to introduce a women’s rights friendly agenda, resulting in claims of “western feminism” at play. Yet, despite the limited positive roles that they individually played in the lives of the women they led, all three women leaders – like many in Asia – have been framed as Asia’s tigers. Analyzing the image of the tiger, this paper examines the question ‘For whom and what did they fight?’

Vijeyarasa, R 2017, 'The legal legacy of women leaders in Asia: Ending violence against women in Indonesia, the Philippines and Sri Lanka', http://www.arts.uwa.edu.au/__data/assets/pdf_file/0003/3046620/WIA-prog…, Women in Asia Conference, University of Western Australia.

Vijeyarasa, R 2018, 'Women leaders in a man's world: Does a feminist foreign policy require a woman leader at the top? - Part II', Center for Feminist Foreign Policy.View/Download from: UTS OPUS

Tackling gender-inequality through the law: Improving accountability for gender-responsive laws at the domestic level

Legislative outcomes of women leaders in Bangladesh, Indonesia and the Philippines