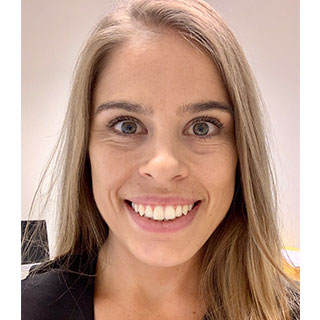 Morgan completed a Bachelor of Forensic Science in Applied Chemistry (Honours) degree at the University of Technology Sydney (UTS) in 2012. She then completed her PhD at UTS in 2018 on the development of new methods for the identification of new psychoactive substances in seized illicit materials. Her research in this field of forensic chemistry and forensic toxicology has led to ongoing international industry collaboration and commercialisation of a presumptive test for the drug class, the synthetic cathinones.

In her role as a Scholarly Teaching Fellow, Morgan coordinates, develops, and lectures into a number of chemistry subjects at UTS.

Increasing reports of neurological and psychiatric complications due to psychostimulant synthetic cathinones (SCs) have recently raised public concern. However, the precise mechanism of SC toxicity is unclear. This paucity of understanding highlights the need to investigate the in-vitro toxicity and mechanistic pathways of three SCs: butylone, pentylone, and 3,4-Methylenedioxypyrovalerone (MDPV). Human neuronal cells of SH-SY5Y were cultured in supplemented DMEM/F12 media and differentiated to a neuronal phenotype using retinoic acid (10 μM) and 12-O-tetradecanoylphorbol-13-acetate (81 nM). Trypan blue and lactate dehydrogenase assays were utilized to assess the neurotoxicity potential and potency of these three SCs. To investigate the underlying neurotoxicity mechanisms, measurements included markers of oxidative stress, mitochondrial bioenergetics, and intracellular calcium (Ca2+), and cell death pathways were evaluated at two doses (EC15 and EC40), for each drug tested. Following 24 h of treatment, all three SCs exhibited a dose-dependent neurotoxicity, characterized by a significant (p < 0.0001 vs. control) production of reactive oxygen species, decreased mitochondrial bioenergetics, and increased intracellular Ca2+ concentrations. The activation of caspases 3 and 7 implicated the orchestration of mitochondrial-mediated neurotoxicity mechanisms for these SCs. Identifying novel therapeutic agents to enhance an altered mitochondrial function may help in the treatment of acute-neurological complications arising from the illicit use of these SCs.

Chemical 'spot' tests are a presumptive illicit drug identification technique commonly used by law enforcement, border security personnel, and forensic laboratories. The simplicity, low cost, and rapid results afforded by these tests make them particularly attractive for presumptive identification globally. In this paper, we review the development of these long-established methods and discuss color test recommendations and guidelines. A search of the scientific literature revealed the chemical reactions occurring in many color tests are either not actively investigated or reported as unknown. Today, color tests face many challenges, from the appearance of new psychoactive substances to concerns regarding selectivity, sensitivity, and safety. Advances in technology have seen color test reagents used in digital image color analysis, solid sensors, and microfluidic devices for illicit drug detection. This summarizes current research and suggests the future of presumptive color testing.

Synthetic cathinones are a large class of new psychoactive substances (NPS) that are increasingly prevalent in drug seizures made by law enforcement and other border protection agencies globally. Color testing is a presumptive identification technique indicating the presence or absence of a particular drug class using rapid and uncomplicated chemical methods. Owing to their relatively recent emergence, a color test for the specific identification of synthetic cathinones is not currently available. In this study, we introduce a protocol for the presumptive identification of synthetic cathinones, employing three aqueous reagent solutions: copper(II) nitrate, 2,9-dimethyl-1,10-phenanthroline (neocuproine) and sodium acetate. Small pin-head sized amounts (approximately 0.1-0.2 mg) of the suspected drugs are added to the wells of a porcelain spot plate, and each reagent is then added dropwise sequentially before heating on a hotplate. A color change from very light blue to yellow-orange after 10 min indicates the likely presence of synthetic cathinones. The highly stable and specific test reagent has the potential for use in the presumptive screening of unknown samples for synthetic cathinones in a forensic laboratory. However, the nuisance of an added heating step for the color change result limits the test to laboratory application and decreases the likelihood of an easy translation to field testing.

Color tests are a key tool for the rapid and simple identification of seized illicit drugs. This chapter outlines a series of color tests that can be used for the preliminary identification of new psychoactive substances such as cathinones, piperazines, tryptamines, and amphetamine-type stimulants.

The increasingly large quantities of potentially illicit samples received for confirmatory analysis highlights the importance and demand for preliminary testing procedures that are simple, rapid, selective, inexpensive and able to be used in the field. C