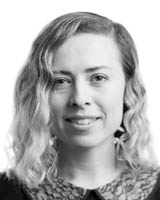 Monica Monin explores design and creative practice within an overabundant and heterogenous media ecology. Specifically her research addresses the effects, possibilities and role of computation, code and data within poetics (making). And further, questions how we can critically and actively work with coding practices in order to better apprehend the intensive media environments involved in the production of knowledge and meaning-making. Her approach to this inquiry has been to research across the fields of art, design and critical media theory, a combination that affords an investigation of the media, materiality and poetics of creative practice from a unique and productive perspective.

Monica is currently undertaking a PhD titled ‘Code as Material’ which looks to materially explore code’s poetics, to subtly consider and elucidate the complexities of how code partakes and matters within world making assemblages. This research was motivated by a convergence she noticed between materialist and new materialist philosophical and theoretical scholarship, that refigures matter as vital and affirms a distributed, emerged agency, and recent practices with computation (including her own) that push the expressive, emergent and (re)combinant capacities of digital processes. Her thesis explores what this intersection affords. In practice, or the process of drawing together a digital system, how might an intensified awareness of material agency and materially driven processes proffer new modes of making, perceiving, thinking with digitality? As an enduring creative entity, dominant understandings of computational processes as instrumental and mechanistic can be problematised through materialism as computational code is able to be alternatively conceived as and immanently situated and co-emergent within an ongoing ecology and process of material formation.

Recent projects include: 'Conversation Theory' exhibited at Firstdraft; ‘The Living Index’ in collaboration with Astrid Lorange, conceived as part of Dr Zoë Sadokierki’s Book of Days project at the Sydney Writer’s Festival; ‘Affective Citations’, also in collaboration with Astrid Lorange, conceived for Liquid Architecture’s ‘Beyond Capital Surrealisms’ event and in response to their prompt: ‘What would a feminist methodology sound like?’; ’Assemblage II’ (2014) at 107 Projects and ‘Assemblage’ as part of the 2013 Underbelly Arts Lab and Festival in collaboration with Kate Campbell, Esther Chung and Simone Mandl.

Monica still undertakes some professional practice alongside her teaching, recently in collaboration with Simone Mandl she designed and developed White Paper, a digital publication for ABC's Radio National.

Artificial intelligence technologies and data structures required for training have become more accessible in recent years and this has enabled artists to incorporate these technologies into their works to various ends. This paper is concerned with the ways in which present day artists are engaging with artificial intelligence, specifically material practices that endeavor to use these technologies and their potential non-human agencies as collaborators with differential objectives to commercial fields.

The intentions behind artists' use of artificial intelligence is varied. Many works, with the accelerating assimilation of artificial intelligence technologies into everyday life, follow a critical path. Such as attempting to unveil how artificial intelligence materially works and is embodied, or to critically work through the potential future adoptions of artificial intelligence technologies into everyday life. However, I diverge from unpacking the criticality of these works and instead follow the suggestion of Bruno Latour to consider their composition. As for Latour, critique implies the capacity to discover a 'truer' understanding of reality, whereas composition addresses immanence, how things come together and the emergence of experience. Central to this paper are works that seek to collaborate with artificial intelligence, and to use it to drift out of rather than to affirm or mimic human agency. This goes beyond techniques such as 'style transfer' which is seen to support and encode existing human biases or patterns in data. Collaboration with signifies a recognition of a wider field of what constitutes the activity of artistic composition beyond being a singularly human, or AI, act, where composition can be situated in a system. This paper will look at how this approach allows an artist to consider the emerging materiality of a system which they are composing, its resistances and potentials, and the possibilities afforded by the exchange between human and...

Machine learning technologies present a dramatic shift in both the production and operation of algorithms or codes that determine computational operations. Rather than the application of pre-determined logic to data that takes place in traditional programming, in machine learning masses of data inscribe logic.

Matteo Pasquinelli describes this process as one where a representation of the world via a dataset becomes, through the training of a neural network, an operative function. That most commonly operates in an equivalent world description, with prediction or classification being common aims of the generated function. For example, a database of digital images of numbers used to train a network, is then used to classify other digital images of numbers.

In Matthew Plummer-Fernandez' artwork Novice Art Blogger (noviceartblogger.tumblr.com, 2014) a deep learning convolutional network trained as an image classifier is used to classify images of abstract art from the Tate's online database. Here, the network classifies images from outside the types of images it was trained upon, abstract rather than representational photographic digital images. The uncanny descriptions of the abstract images, generated using the results of their movement through and classification by the network's logics (a Terry Winters painting is described as a group of pastries) show us how the training of networks on specific sets of images create differential forms of seeing and knowing. I analyse artworks as a way and means of mapping the operational roles of images in machine learning based image classification.

Monin, ML & Lorange, A 2016, 'A Poetics of Computation: critical approaches to reading and writing with data', Electronic Visualisation and the Arts Australasia, University of Canberra.

Our work is interested in how data are produced and embodied, both in digital networked culture and as the material for creative and critical inquiry. Our ongoing practice-led research is concerned with the possibilities for thinking about systems in ways that shift dominant ideas about gender, media and technology – in particular, how these ideas are no longer (or perhaps never have been) adequately described by discourses of signification and representation. This year we have been working on a transdisciplinary art project, engaging a material understanding of computational processes and a critical approach to how these processes produce knowledge. We take this engagement as poetic—concerned with the expressive, emergent and (re)combinant capacities of language in a dynamic media ecology. Our work so far has been concerned with the 'real time' of computational and critical labour, manifesting in two durational works for which a co-written text was produced over time while situated in an unfolding public event. The first was 'The Living Index', conceived as part of Zoë Sadokierski's Book of Days project at the Sydney Writers' Festival. The second was 'Affective Citations', conceived for Liquid Architecture's 'Beyond Capitalist Surrealisms' event (focused on the intersection of sound and art) and in response to their prompt: 'What would a feminist methodology sound like?' This paper will introduce our collaborative focus and discuss both works in terms of our methodology and the contingencies that come into play with open systems that actively consider how the digital and analogue are entangled. It will also propose the broader aims of the project, in terms of the possibilities of a critical understanding of digital networked culture and the gendered history of technology. We will draw on recent feminist scholarship including key texts by Luciana Parisi, Tiziana Terranova, Jasbir Puar and Karen Barad.

Assemblage II saw twelve artists create new works in response to a set of physical and digital artefacts discarded by artists during the Underbelly Arts Lab in 2013. Using an absurd system called the 'rules of assemblage', the project asked participating artists to extend, unpack and negotiate the given materials and limitations across physical and digital platforms.

The fundamental idea of Gordon Pask's cybernetic framework 'conversation theory' is that knowledge is constructed through conversation; as a negotiation of views, able to alter the speaker's perceptions.
As part of a longer, ongoing chain of projects investigating the materiality of computation, the work Conversation Theory explores the production of knowledge in a moment where algorithms are the predominant anatomy of composition. In Conversation Theory, two networked 'bots' (small computer programs, presented in the gallery on two screens with cameras) engage in a tête-à-tête. At the centre of their talk a subject, or object, event, datum – a knowable, communicable understanding that moves, as what is 'known' evolves through the bots activities and conversation. Their analogue, on-screen 'speech acts' creates a communication that is unidirectionally circular and observable, as one bot can read images and display text and the other can display images and read text. In order to move, describe, expand, contextualise the centre point of their discussion (to process what they have read from each other as text or image) they are able to individually access language and image processing frameworks and knowledge bases.