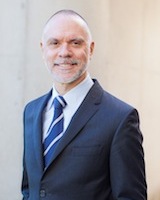 Professor Michael McDaniel is a member of the Kalari Clan of the Wiradjuri Nation of Central New South Wales with a distinguished career in Indigenous higher education and record of service to the arts, culture and the community spanning more than three decades.

Michael is the Pro Vice-Chancellor (Indigenous Leadership and Engagement) and Director of Jumbunna Institute for Indigenous Education and Research at the University of Technology Sydney where he is also a Professor in Indigenous Education. Michael is a member of the National Aboriginal and Torres Strait Islander Higher Education Consortium (NATSIHEC) and the World Indigenous Nations Higher Education Consortium (WINHEC). Michael is also a Fellow of the Royal Society of New South Wales and a member of the Australian College of Educators.

As an educational leader and innovative thinker Michael has been instrumental in the development of approaches that have seen UTS positioned as one of the leading Australian universities in Indigenous higher education and research, and arguably an internationally significant university in this area. Most recently he has led UTS in its ambition to establish Australia’s first university based Indigenous residential college. https://www.uts.edu.au/partners-and-community/initiatives/indigenous-residential-college

Michael is a member of the Indigenous Peoples’ Organisation (IPO) Network Australia, a broad coalition of Aboriginal and Torres Strait Islander peoples, organisations and individuals that advocate for the promotion and protection of Indigenous human rights at the national and international level and has on a number of occasions been a delegate to the United Nations Permanent Forum on Indigenous Issues (UNPFII).