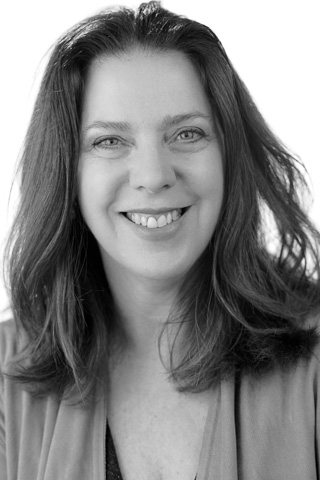 Dr Megan Heyward is an academic and media artist whose creative practice is at the intersection of storytelling and digital technologies. Working across interactive narrative, electronic literature, locative media and augmented reality, she has created digital narratives for mobile, tablet, desktop, exhibition and other platforms. Her works have been exhibited in Australia and internationally, including Europe, Japan, Canada and the US. Megan continues to investigate emerging formats, exploring the storytelling and artistic potentials of interactive documentary, mobile apps, AR and VR.
Megan's locative media and augmented reality mobile app Notes for Walking attracted thousands of visitors to Middle Head National Park for the Sydney Festival, 2013; and she was funded by the Australia Council to develop an interactive narrative for iPad tablets, The Secret Language of Desire, in 2015. Her earlier award-winning interactive narrative works I Am A Singer (1997) and of day, of night (2003) fused moving image, literary, game and interactive aesthetics into pioneering digital narratives. She is a Senior Lecturer at the University of Technology Sydney, teaching into the Media Arts and Digital and Social Media programs.

For more information about Megan's creative practice and research, please visit her website, "spaces in between time" . (open an external site)

This handbook is an essential creative, critical and practical guide for students and educators of screen production internationally.

De Certeau states, in The Practice of Everyday Life, that “There is no place that is not haunted by many different spirits hidden there in silence, spirits one can “invoke” or not. Haunted places are the only ones people can live in…”

In Watery Ghosts, Megan Heyward explores Sydney’s Parramatta River as a place haunted by troubling “spirits”; a set of complex, shifting histories that encompass the poisoned remnants of the Radium Hill uranium refinery at Hunter’s Hill, chemical contamination of the river from the AGL and Union Carbide plants at Rhodes, and the Victorian structures of insane asylum at Bedlam Point, Gladesville, alongside more recent sanitisation and re-imagining of the river. The chapter examines intersections of social history, personal memory and place at the site of the Parramatta River, and how these uncomfortable and and ambiguous narratives formed the basis of a media art installation, Cleanse, which conveyed these histories to a broader gallery audience in the Memory Flows exhibition, staged on the banks of the Parramatta River at Newington Armoury in 2010.

Presented Creator Session at ISEA 2013 conference concerning J1 artwork Notes for Walking, a major exhibited locative artwork in Sydney Festival, January 2013. The conference presentation outlined the emergence of the project from research into locative media, spatial narrative, augmented reality and relationship with pilgrimage practices. It discussed technical, audience and site specific challenges and how these impacted on creative and technical development of project; audience numbers, statistics, outcomes. ISEA 2013 is a major annual international electronic arts conference, and the presentation was to an international audience.

The Alchemist’s Guide to the City is a digital media app for mobile phones in which the philosophical notions of the medieval alchemists are used as a filter for the contemporary world. Comprising 26 app screens, 18 overlay screens, 9 sound files. Written, designed and programmed by Megan Heyward. Illustration by Grace Felstead, sound design by Michael Finucan. Exhibited at international electronic literature conference and exhibition ELO 2017, Porto, Portugal, July 18-22 2017.

Heyward, ME 2015, 'The Secret Language of Desire', ELO 2015: The End[s] of Electronic Literature, Apple, Bergen, Norway.View/Download from: UTS OPUS

The Secret Language of Desire is an electronic literature app for iPads, in which 27 textual chapters are augmented with animation, sound, interactive and haptic elements, working with the multimodal and interactive affordances inherent to digital tablets. The creative work comprises 27 chapters, over 60 pages/ screens of content, and over 50 animation elements, totalling 5 mins 15 secs of animation, with an overall duration of around 30 minutes.
All writing, photography, graphic design, animation, layout, and programming by Megan Heyward. Sound design by Michael Finucan.

This project has been supported by the Literature Board of the Australia Council for the Arts.

The Secret Language of Desire is published in the AppStore.

Background of day, of night is a major published interactive digital media work. Funded competitively by the Australian Film Commission, exhibited and published internationally, of day, of night operates at the intersection of narrative and interactive media forms. Integrating video, audio, stills, textual and interactive components, it is a major electronic hypertext notable for its rich visual and aural landscapes, strong narrative, and innovative fusion of filmic, textual and audio elements. The high degree of research, creativity and quality represented by of day, of night can be demonstrated by its worldwide exhibition (including Australia, Japan, USA, Europe), its nomination for and high commendations in significant peer reviewed awards (Festival Awards for Literature, AIMIA) and its commercial publication in 2005 by major US hypertext publisher, Eastgate Systems. Contribution Megan Heyward is the original writer, director, producer, graphic designer, video editor, and interactive programmer of the work. Significance The significance of this research is that it extends and redefines traditional notions of narrative through its engagement with electronic, interactive, hypertextual media forms. In of day, of night, traditional experiences of both textual and filmic forms are extended through the fusion of textual, graphic, and filmic media in the work. The impacts of interactivity on narrative form are explored through the increased participation and user control possible in the reading of the work. of day, of night is a unique creative fusion of narrative and interactivity, recognised through international publication, exhibition, awards and peer review.

The Durational Book Group is comprised of media artists Chris Caines and Megan Heyward, design researchers Zoë Sadokierski and Jacqueline Kasunic, and poet/essayist Astrid Lorange. While all five have well recognised individual practices, they are linked by an appreciation of the fertile interplay between forms and technologies, in particular that between text and graphic, audiovisual, networked and sculptural forms. The group was formed to explore the intersections and extensions afforded by interdisciplinary collaborative practice. During ISEA2013 (International Symposium for Electronic Art) the first iteration of the Durational Book project expanded the historical idea of the book to include forms of contemporary media: print media was mixed with audio-visual and interactive content. The group worked from the State Library of NSW's archive to generation of a variety of speculative works, investigating the library as a creative tool. During the week-long event, the artists added daily to a new archive of analogue and digital material, text, illustration, video and sound. This material will eventually form the content of an expanded `book'.

"Cleanse" is a video installation examining the complex histories of memory and place associated with Sydney’s Parramatta River. Cleanse explores the murky traces of the Parramatta River’s contentious past – the Radium Hill uranium refinery at Hunter’s Hill, chemical contamination from the Union Carbide plants at Rhodes, the insane asylum at Bedlam Point – and shifting narratives of memory and place through video montages of the river’s past and present that are threaded into an immersive installation comprised of authentic 1930’s river artefacts and video projections.

"Cleanse" was exhibited within Memory Flows, an Australia Council funded project exploring water, flows and memory, suggesting “we are in an active and ethical relationship with our waterways…We can sense the flow of memory between ourselves and rivers as a network of complex relations” (Norie Neumark, Memory Flows catalogue, ISBN 978-0-9808082-0-9).

The Memory Flows exhibition was reviewed in RealTimeArts “the shapes of water”, July 2012, http://www.realtimearts.net/article/issue97/9919
with "Cleanse" singled out as “the most stylish” in terms of its “narrative approach to the thematic”, so that “these memory fragments are intriguingly rich with a sense of the past, implying an innocence but also an ignorance in our past interaction with the ecosystem”.

Notes for Walking is a major published and exhibited locative media artwork that ran in the visual arts program of the Sydney Festival from Jan 5-27 incl, 2013. Using location based technologies delivered via smartphones, audiences downloaded a mobile app to discover a set of original video / audio contents that had been electronically tagged to the former naval fortification site at Middle Head. The work incorporated spatial and locative narrative approaches to mobile media content and integrated video and audio materials specifically crafted for mobile, outdoor conditions. A dedicated original app was developed for the work, along with video/audio/textual contents, a gallery installation, multichannel sound installation, dedicated website and social media presence. Notes for Walking was enormously successful during it's exhibition in the Sydney Festival, far exceeding expectations in terms of audience numbers and project reach. ITunes and channel download data recorded over 2,600 downloads, with an estimated 3,500 to 4,000 onsite visitors to Middle Head during January- enormous numbers for a location based artwork. Along with reaching a large audience, Notes for Walking generated multiple media articles due to its combination of original cultural contents and it's location based, mobile delivery mode. While a number of locative projects have delivered and worked with audio, stills and GPS data, very few projects have successfully worked with video content in a location specific mode via smartphone. The work and audience reach arguably proves the viability of location specific approaches in art, media, historical and cultural contexts.