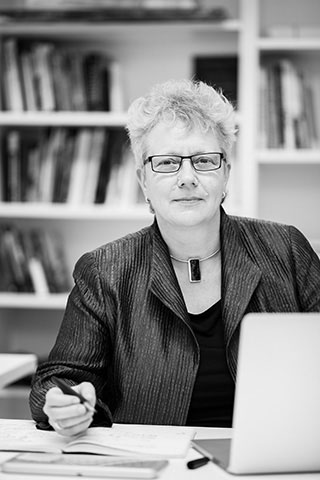 Professor Louise McWhinnie is the inaugural Dean of the new Faculty of Transdisciplinary Innovation.

Over the last three decades Louise has lived and worked as a designer and academic in three continents (Australia, Europe and Asia), with in the last decade her research conducted within a fourth (America).

As Associate Dean for nine years in the UTS Faculty of Design, Architecture and Building she provided creative leadership in the development and implementation of innovative university teaching and learning, as well as educational quality assurance. Her role as Dean builds upon this work, her contribution to the development of UTS's first transdisciplinary degree program the Bachelor of Creative Intelligence and Innovation (BCII) and her concurrent role as Head of the Department for Creative Intelligence and Innovation. In late 2016 the BCII was presented by Louise at The Wharton Reimagine Education Awards in the USA, where it was awarded the bronze award for Presence Learning. Referred to as the 'oscars of education' the Wharton Awards attract over 500 applications from the world's leading educational institutions.

Louise’s primary research examines the role of 20th century vernacular typography, with a particular focus upon the formation of the commercial corridors of urban and sub-urban America. Her documentation plays an important role in the development of a new typographic timeline recording America’s design, social, cultural, commercial and economic development.

Her research also focuses upon education; how creative, cultural and linguistic diversity shapes international educational practice, the role of the studio, and the development of internships and internship-like experiences within the creative arts. Her research and its integration into teaching have resulted in an Australian Teaching & Learning Council citation and a UTS Learning and Teaching Award, as well as being ‘highly commended’ in the Vice Chancellor’s Research Awards for integration of research into teaching.

Over recent years Louise has delivered presentations, papers, master classes and professional workshops within Australia, London, Cyprus, Istanbul, Greece and the USA (Washington DC, Chicago, Boston, Philadelphia, Cincinatti, New Orleans and San Antonio). She has worked closely with Creative Intelligence and Innovation staff and students in transdisciplinary teams working with industry and government (Visa, Government House NSW) on a series of wicked problems. Louise also writes articles for The Conversation, and has undertaken radio and TV interviews in Australia and overseas.

Member of the Association Typographique Internationale (the premier worldwide organisation dedicated to type and typography).

Higher education is experiencing substantial change, with considerable debate regarding the potential of technology within learning and teaching. Whilst technology is driving pedagogic change, there are two key challenges for educators in the creative arts. Maintaining the distinctiveness of the studio learning and teaching experience is paramount for creative practice outcomes. At the same time, direction setting is vital for contemporary and emerging creative practice pedagogy. We suggest that responding to these challenges requires a collaborative action research approach for leaders of learning and teaching, and an effective model of leadership for changing practice. A new integrated model is proposed, drawing upon creative leadership and appreciative enquiry frameworks, for developing and implementing a new technological learning paradigm. The article highlights the important role that learning and teaching leaders can play, through collegial and strategic collaboration across institutions, in shaping creative practice pedagogy futures. It is offered as a provocation for exploration and wider discussion on the issues, possibilities and implications of contemporary models – for learning and teaching and its leadership.

The studio is a core component of learning and teaching and the educational experience in the creative arts. Educators regard the studio as central to the support and development of creativity, as graduates prepare for employment in industry. However, in the literature to date on the studio mode of learning and teaching, there has been little focus on the industry studio. Based on interviews with a sample of ten industry studio practitioners, this article examines their perspectives on what the industry studio is, and whether the educational studio reflects this. The article highlights the dimensions and characteristics of industry studio practice identified by these practitioners, together with their broad perspectives on what studio should be within education. Reflection includes some of the implications and challenges for education, with recommended priorities for enhancing forward-thinking educational practice.

The following reviews are a response from a philosopher and two designers to the design for the Penguin Great Thinkers series. The contents have not been read by the design reviewers, instead their response is to the physicality of the books, and as such should be considered more a review of the books design than their contents.

Whilst the history of Hollywood obviously exists within its extensive cinematic
back catalogue, an alternative visual record of its development also exists set
within the city streets of Hollywood and Los Angeles. This is where layer upon
layer of a typographic vernacular still exists. Within this living museum of the
streets, there still remain examples of the twentieth century type that created and
sold an image of the golden era of Hollywood. These are as much a record of
Hollywood, as much as the movies it produced. As an exercise in 'Typographic
Archaeology', this chapter explores the historical development of the commercial
letterforms and signage of the Los Angeles and Hollywood urban roadside,
utilising examples designed to adorn the theatres, cinemas and diners of
Hollywood's leisure industries. Embedded within its everyday environment, but
often ignored, these visual remnants enable us to explore not only the graphic
history of the development of Hollywood, but also its essential particularity, yet
also widespread impact. Such typographic remnants are a vital, but fast
disappearing record of the creation of the visual image of a long gone Hollywood.
Set loud and proud upon buildings against the backdrop of the Californian sky,
such examples must be recognised as an important a record of Hollywood's
development and its particular social and cultural environment. Most importantly,
they also need to be recognised for the impact they had on the formation of
America's twentieth century design history.

The history of Hollywood is a visual history, with its cinematic back catalogue available for all to view. Whilst Los Angeles and Hollywood are the present and the future, they still very much embody their past. This past is not however simply a celluloid record, but also a typographic one: not merely a three-dimensional world stored on two-dimensional negative, but a living history, physically embedded in the everyday streets. The streetscape of Hollywood and LA is therefore an ordinary environment that represents and records an extraordinary place, in which a particular form of typographic communication developed. As an exercise in 'Typographic Archaeology', this paper explores the development of the commercial letterforms and signage of Los Angeles and Hollywod, utilising examples that still adorn theatres, cinemas and diners. Often ignored, these however form a vital visual resource in understanding the particular development of Hollywood. Whilst decay and rapid redevelopment make such typographic archaeology and photographic recording a vital act in the preservation of a fast disappearing historical resource, it is this recording which contributes an alternate layer to the traditions of typographic history, as well as an understanding of the particularity of Hollywood's and therefore America's (typo)graphic development.

Whilst the history of Hollywood obviously exists within its extensive cinematic back catalogue, an alternative visual record of its development also survives. This can be found embedded within the city streets of Hollywood and Los Angeles. For this is where layer upon layer of a typographic vernacular exists, forming a living museum of the letterforms that created and sold the image of Hollywood. As an exercise in `Typographic Archaeology', this paper explores the historical development of the commercial letterforms and signage of the Los Angeles and Hollywood urban roadside, utilising examples that adorned the theatres, cinemas and diners of the leisure industries that surrounded Hollywoods entertainment industry. Embedded within the everyday environment, but often ignored, these visual remnants enable us to explore not only the graphic history of the development of Hollywood, but also its particularity and its widespread impact. Such typographic vernacular remnants are a vital, but fast disappearing record of the visual image of a long gone Hollywood. Set loud and proud upon buildings against the backdrop of the Californian sky, such examples need to be regarded as not only an important record of the distinct stages in Hollywoods development, but also examined for the social and cultural particularity of their design. The examples that still exist need to be recognised not only for the role they played in the selling of the image of Hollywood, but also the significant contribution they made to the development of the particularity of America's visual culture and its contribution to twentieth century design.

McWhinnie, LJ 2010, 'The U.S. of A to Z: The Punctuation of the Roadside', -, Lending Grace to Language: 4th International Conference on Typology and Visual Communication, ICTVC, Nicosia, Cyprus.

"the photographs... show what weather, wit, accident, lack of judgement, bad taste, bad spelling, necessity, and loud repetition can do to put a sort of music into the streets where we walk" (Brownjohn, Robert: 'Street Level'. Typographica, No.4, zDecember 1961). This paper presents the first results of a typograhic project, in which the author is photographically recording vernacular letterforms from the American roadside. Intended to form a typographer's resource of artefact and ephemera, the images were recorded predominantly within the bible-belt states of the American south. Taken in communities temporally removed from the corporate homogeneity of strip-mall America ('Generica'), by the advancing tapestry of interstate highways, the images record a typographica americana, too often unacknowledged and unappreciated. The images demonstrate the particular grace inherent within not only perfect, but also imperfect type. Through the good, bad and the ugly, the author explores the peculiar beauty in the imperfection of a typographic roadside culture produced by sign writers and non-designers: the mixed messages formed from mistakes, from adaption, single letters, clip-on letters, living and dead neon, bad kerning and distressed type.