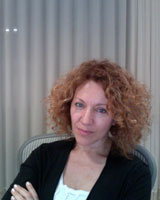 Judith Friedlander is a post-graduate researcher at the Institute for Sustainable Futures examining the role of the media in contributing to successful environmental campaigns. Focusing on organizational media strategies to encourage people to adopt a more sustainable diet, she draws upon her background as newspaper editor and feature writer with The Australian, The Sun-Herald and The Sydney Morning Herald and Channel Nine television producer and researcher.

Previously, Judith was associate producer of the pioneering television environmental documentary, Down to Earth, and has been regularly published on environmental matters in leading Australian newspapers and magazines.

She has also been awarded a post-graduate degree in Interactive Multi-Media from The University of Technology Sydney. Research conducted included the development of a web development tool for NSW primary schools.

Worldwide, livestock and meat production have been identified by key governmental and scientific institutions as major contributors to climate change, intensive water use, high phosphorous use, and other environmental problems. These adverse environmental impacts are increasing, as the global consumption of livestock products is growing rapidly. Media coverage of the environmental impacts of livestock and meat production in Australia and the United States has been limited and does not communicate a message consistent with the available scientific evidence identified in academic literature. A media content analysis of how the subject of meat has been covered by major Australian newspapers over the past five years provides insights into the news frames and news values in portrayals of meat. News frames of animal welfare, the economy, and food or culinary associations dominated over stories about climate change and other environmental impacts. Media content analysis determined that news values of proximity, conflict, and human interest dominated. Newspaper print media retains a vital, albeit diminishing, role in agenda setting. As such, the content analysis findings in this paper are valuable to inform news media campaigns that seek to stimulate increased media coverage of environmental and other impacts of meat. Such campaigns may assist in placing the issue more prominently on the public agenda.

Friedlander, J 2012, 'Why aren't we talking about meat and climate change?', The Conversation, vol. 26 Nov.