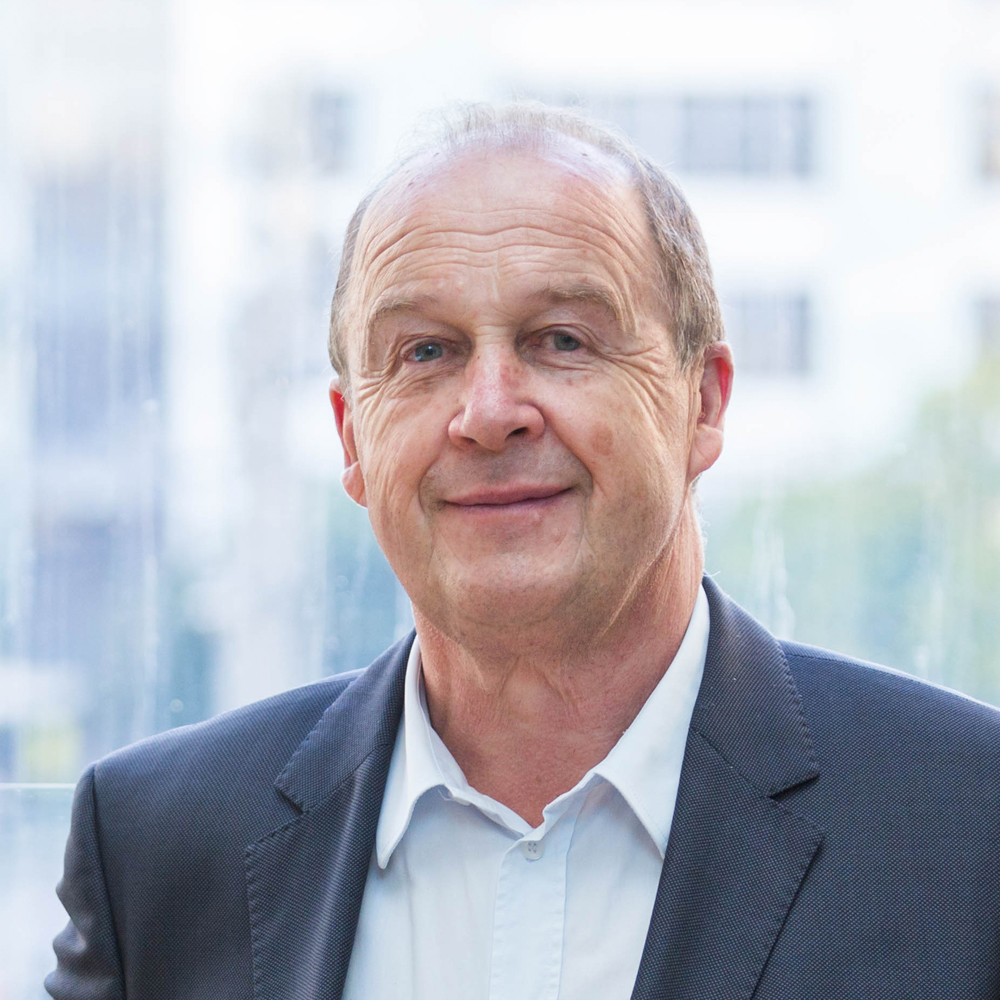 John Dale is Professor of Writing at UTS. He is the author of seven books including the best-selling Huckstepp which was republished in 2014 and three crime novels Dark Angel,  The Dogs Are Barking, published with Serpents Tail Press in the UK, and Detective Work. He has also published a memoir, Wild Life, an investigation into the fatal shooting of his grandfather in 1940s Tasmania.

John joined the writing program at UTS in 2000 after completing his Doctorate of Creative Arts for which he was awarded the 1999 Chancellor's Award. He has edited two anthologies, Out West and Car Lovers, and co-edited  a third anthology, Best on Ground, on Australian Rules football.

His novel, Leaving Suzie Pye, was published in 2010 and translated into Turkish. He has been a judge of several major Australian literary awards and his essays, reviews and non-fiction have appeared in a wide variety of journals and newspapers. His research and teaching areas include narrative fiction, creative non-fiction, the novella and crime narratives. He has written a  novella Plenty  and has edited the forthcoming collection Sydney Noir (2018) for Akashic books. He is currently writing a dystopian novel set in London.

Winner of the Angus & Robertson Fellowship

Dale, A 2019, 'What would Nineteen Eighty-Four be like if it were written today?', New Writing: the international journal for the practice and theory of creative writing, vol. 16, no. 1, pp. 1-25.

If George Orwell were alive today what would his politics be? The writer Norman Podhoretz posed this question in 1983 and concluded that Orwell would have sided with the neo-conservatives. For Podhoretz, Orwell's driving passion was his opposition to totalitarianism, and if he had lived, Podhoretz argued, he would have come to identify with those neo-conservatives opposed to Soviet expansionism. Great writers engage with the changing times and by using their imaginations transform their ideas and environments into fiction. More than any other writer of the 20th century, Orwell responded to a period of historical change by imagining his dystopian future of Nineteen Eighty-Four, perhaps the most influential political novel ever written. At the same time Nineteen Eighty-Four was very much a product of post-war England with its rations and shortages. Orwell, in fact, remained a socialist until his death in January 1950, but the far more intriguing question is what Nineteen Eighty-Four would be like if it were written today, in an age of Islamist terror, fake news and post-truth politics.

Joseph, S & Dale, A 2018, 'To edit or not to edit? Why is editing academic collections not recognised in the Humanities?', TEXT: Journal of Writing and Writing Programs, vol. Special edition, no. 51, pp. 1-11.

Edited academic books garner neither research metric nor institutional praise,
compared to peer reviewed journal articles or monographs. For the editor, there
seems no reason to undertake such volumes. But we still do them; we still edit
or co-edit them. Louise Edwards claims there are many good reasons why
academics persist in editing (and reading) this type of academic output, her
prime one being that they ‘meet a series of distinct intellectual and community
needs’ (Edwards 2012: 62). This paper brings together two academics who
have both contributed to and edited or co-edited such volumes. The scope of
the paper is their experiences in editing and co-editing, in order to open up a
discussion about the worth of such volumes: why, despite the university’s
reluctance to recognise them as either creative or research outputs, academics
continue to regard editing as a meaningful scholarly pursuit; and importantly,
as we clearly do value these undertakings, how can institutional attitudes to
their merit be changed? The co-authors discuss their own personal ethos and
experiences about editing and co-editing these texts. This paper stems from a
panel at the 2017 AAWP conference, an open dialogue with the audience
facilitated by a collegial interlocutor, Dr Carolyn Rickett, herself a co-editor of
books.

This essay examines the role of the narrator as detective in the construction of a non-fiction narrative based on an unsolved murder. The majority of so called “true-crime” books are written as long pieces of journalism with little investigation of character and a tendency to summarize and sensationalize events. However, there is scope for a different kind of narrative where the narrator, working alongside the reader, functions as a “real” detective to reconstruct from the words and documents of others a “true account” of the crime and to reveal its deeper implications. Drawing on the writer’s own experience in investigating the murder of a prominent police whistleblower in Sydney, Australia, this essay examines the technical and practical difficulties facing a writer when investigating an unsolved murder.

In Chronicle of a Death Foretold Gabriel Garciacutea Maacuterquez uses the device of an un-named shadowy narrator visiting the scene of a killing and beginning an investigation into the past. From the beginning of the text, the author sets up a dialogue between the past and the present. Garciacutea Maacuterquez does not assert that the truth exists objectively in the world and present a version of this reality to the passive reader as fact. In Chronicle of a Death Foretold the narrator and reader are forced to choose between contradictory versions of what constitutes the truth. His narrator is not all-knowing, but a shadowy detective figure who actively invites the reader's participation in the detective process. Juxtaposing viewpoints, making the most of the uncertainties of memory, Garciacutea Maacuterquez's questioning narrator is perfectly suited for a non-fiction narrative where the murderer or murderers are unknown. Where the truth is not straightforward. Working quietly as a detective in partnership with the reader he tries to reconstruct from the words and documents of others a true fiction, of what 'really' happened. For this work is an investigation not only of the past and a small Colombian community, but also a work which explores the dominant narrative in the lives of all human beings: the chronicle of a death that cannot be escaped, and which will bring every individual narrative to an end.

This essay investigates the difficult in profiling the victims of violent crime. ‘Perhaps all writing of the narrative kind is motivated deep down,’ Margaret Atwood has written, ‘by a desire to make the risky trip to the Underworld, and to bring something or someone back from the dead ’ Do writers treat the dead differently, particularly the victims of violent crimes? Are profiles of crime victims handled with less or more respect than profiles of the living? This essay draws on the author’s own experiences of researching two books about two murdered women. One of these women left court documents, personal writings and archival material that shed light on her character; the other left nothing from which a writer could draw material. What are the principles and practices involved in profiling murder victims. How does an author give voice to the dead?

It’s October 2048 and an Islamist political Party has swept to power in Britain’s general elections. Overnight the country is transformed by the introduction of the blasphemy laws.

John Dale.
An investigation into an unsolved Sydney murder

creative research chapter on the history of Camperdown Park

Plenty is a contemporary novella about the construction of an asylum seeker detention centre in a small coastal town in northern australia and the impact of that centre on the local inhabitants. Based on extensive research, Plenty is a fictionalised response to an issue that has divided the nation.

He knows what he wants . . .just not how to get it Everyone at work wants to know why an associate professor of philosophy would stoop to having sexual relations with a man as spectacularly unsuccessful as myself. Well, I don't like to blow my own trumpet, but I think that, deep down, Suzie views me as someone financially, morally and intellectually her inferior. Joe has had a great life, untroubled by career or monogamy. He's convinced that whatever he's doing, he'd still really rather be having sex -- if only middle age hadn't made it so hard to find a woman who will share his enthusiasm. When he meets Suzie Pye she seems just the ticket -- she even says she only wants a sexual relationship. But nothing is ever that simple ...As Joe struggles to hold Suzie to her promise, he finds himself entangled in the complexities of her life, her teenage children, her job -- and his feelings towards her. Not to mention the complications of his life: e-mail surveillance, a workplace panel of inquiry, and his own family. Breezy, hilarious and insightful, this new novel from John Dale examines the nature of lust, love, ambition and what it means to be a man. Set in Sydney, Istanbul and Gallipoli, it is the story of an ordinary guy living at the mercy of his desires.

Background - The borders between genre fiction and literary fiction are growing more porous, with conventions of each crosspollinating in ways not seen previously. Since Miguel de Cervantes Don Quixote, the blending of genres has produced many of the worlds greatest works of literature. In recent years the merging of genres such as the realist novel, journalism and detective fiction have produced original hybrids of literature. With the emergence of new communication technologies and systems for delivering text, we are witnessing a breakdown of traditional generic borders and the emergence of new genres. If genres are a way of interpreting and representing our world, then as our methods of viewing the world change, so do genres. Contribution - During the past 20 years I have explored and experimented with the blending of genres: literary fiction with true crime, detective fiction and biography; and more recently in Wild Life with the merging of travel writing, essay and memoir. Significance - Wild Life is an original contribution to creative writing that is part true crime, part memoir and part fiction. It combines extensive research into the history of Beaumaris Zoo, home to the last thylacine in captivity, and research into the failed tobacco industry in rural Tasmania prior to World War 2, with travel writing and philosophical issues. It provides practitioners with a model to use when hybridising genres. Its importance was attested to by the Sydney Morning Herald who described Wild Life as outstanding and the quality of the writing as seamless.