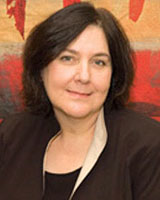 Jennifer Burn teaches the specialist law elective subject, The Law of Slavery and Human Trafficking. Jennifer has taught in the areas of administrative law, citizenship, migration and social justice issues for many years.

Due to their exposure to the specialised legal practice conducted with Anti-Slavery Australia, these lawyers know the impact of trafficking and slavery on trafficked people and have been able to use that knowledge to advocate more effective legal and human rights practices and protections. Anti-Slavery Australia's research focus has been to review the operation of immigration law, family  and criminal law. Examples include the evaluation of the trafficking visa framework and associated social support administered by the Australian Red Cross and research into the emerging issue of forced marriage in Australia. Anti-Slavery Australia welcomes student contributions to the anti-slavery initiatives and has a robust community engagement focus.

Jennifer Burn has had an active involvement in the development of Australia’s response to human trafficking and slavery. She was a foundation member of the National Roundtable on Human Trafficking and Slavery in 2008 and continues in that role.

In this paper, I will explore the Australian context of human trafficking and slavery by reviewing narratives drawn from two separate coronial inquiries into the deaths of two people who were never legally recognised as being trafficked into Australia. Puongtong Simaplee died in Villawood Detention Centre in Sydney on 26 September 2001,1 and Manjit Singh died on 26 August 2011 in the intensive care unit of a Sydney hospital from complications of surgery.

This article explores Australias response to the emerging issue of forced marriage. In light of community and government responses to forced marriage, we review the challenges involved in defining forced marriage and the degree to which the practice overlaps with other forms of exploitative conduct such as servitude and slavery. While we welcome the reform of existing criminal laws to fully reflect Australias international obligations to prohibit `practices similar to slavery, we caution against prioritising prosecutions over preventative and protective strategies. We argue that the creation of specific criminal offences of forced marriage should be accompanied by the introduction of new, family law-based civil remedies for people seeking to avoid or escape forced marriage, and targeted support services for people in, or facing, forced marriage. These measures should be accompanied by investment in community legal education and consultation in order to deepen the communitys understanding of forced marriage in Australia

Internationally, it is widely recognised that labour law and associated
protections are a critical part of any comprehensive response to
trafficking in persons. In this article, we argue that while Australia
has taken some important steps to incorporate labour protection
systems into the anti-trafficking response, there is still more work to
be done. In particular, the federal, and state and territory governments
have yet to take up the opportunity to link anti-trafficking efforts
with initiatives aimed at improving the working conditions of workers
in the sex industry. We suggest this reflects a common—but
unjustified—assumption that “labour trafficking” and “sex trafficking”
are distinct and different species of harm. As a result of this distinction,
workers in the Australian sex industry—an industry where slavery and
trafficking crimes have been detected— are missing out on a suite of
potentially effective prevention interventions, and access to civil
remedies. We argue that there is a need to provide practical and
financial support, so that the national industrial regulator, the Fair
Work Ombudsman, can work directly with sex worker advocacy groups,
to examine opportunities and barriers to accessing the labour law
system, particularly for migrant sex workers.

This article summarises the treaty provisions under international laws which address slavery, slavery-like practices and human trafficking and discusses their relevance in the Australian context.

This article reviews the new changes to the visa framework for victims of human trafficking, which simplify a once complex and uncertain process, make family reunification easier and strengthen access to government support services.

For decades the international community has conducted a delicate and politically charged balancing act trying to reconcile the inexorable increase in refugees-and the need to find permanent homes for them with the fundamental right of all countries to have secure frontiers. While the notion of non-refoulement remains fundamental to the treatment of asylum seekers, their rights vis A vis the states in which they seek asylum are significantly circumscribed by their alien status. States have a right to control entry to their territories. In the development of asylum law and policy, the central difficulty for states, and indeed the international community, is how to construct an appropriate balance between the urgent humanitarian demands to protect those who are genuinely in need of asylum, and the exclusion of those who do not qualify for humanitarian protection.

This submission supports the Crimes Legislation Amendment (Powers, Offences and Other Measures) Bill 2014. It supports a criminal justice response to forced marriage and also advocates for the introduction of a civil response in order to address victim support and protection.

This submission supports the Crimes Legislation Amendment (Psychoactive Substance and Other Measures) Bill 2014. It notes that the legislative changes are consistent with Australia’s obligations under international law.

This submission argues against the repeal of complementary protection provisions under the Migration Act 1958 (Cth). Complementary protection offered victims of human trafficking the chance of a visa without relying on their participation in the criminal justice procedure. The legislation proposes that these provisions be replaced with an ‘administrative process’. Anti-Slavery Australia has grave concerns about the lack of clarity over what this process will involve.

A detailed report on the many facets of child marriage, from its cause and impact to the necessary steps we must take to end the practice. There is also specific focus on Australia and the Indo-Pacific region and the role of the Australian government in ending child marriage.

This submission supports the extension of existing vulnerable witness protections available to children, adult victims of slavery, slavery-like practices and human trafficking as well as “special witnesses”. It further supports the creation of Victim Impact Statements, which take into account physical, psychological and emotional suffering as well as economic loss.

This information sheet discusses Australia’s current trafficking visa framework and highlights where gaps exist in the provision of support to victims of human trafficking.

This submission highlights six areas for further engagement by the Australian government to address the issues of slavery, slavery-like conditions and people trafficking in Australia. These areas include national compensation, support programs, forced marriage and the legislative scheme on slavery. The final section provides a more general discussion on vulnerable groups and non-legislative strategies for combatting slavery and people trafficking.

This submission supports the clarification of slavery and sexual servitude offences and the creation of stand-alone offences of forced labour, deceptive recruiting and forced marriage in the Criminal Code Act 1995 (Cth). The Bill is praised for strengthening Australia’s compliance with international law. Anti-Slavery Australia also uses this opportunity to reiterate the need for a compensation scheme for victims of trafficking, which is not addressed in the Bill.

Understanding the gaps in prevention and protection needs in trafficking and exploitation of women and girls in Australia. An Evidence review.

This supplementary submission outlines the visa framework for trafficked people in Australia and recommends allowing more time for victims to reflect and recover, as well as recommending that a permanent witness protection visa should be issued within 6 months of the grant of a criminal justice stay visa to provide security to victims.

This submission is a response to the Community Relations Commission Inquiry into people trafficking in Australia and NSW. Anti-Slavery Australia provides background information about slavery and people trafficking to Australia and addresses the existing legislative provisions at both state and federal levels, their coordination. It further discusses community outreach programs, forced marriage and the need to develop a compensation scheme. Recommendations are made throughout the submission on how to strengthen the NSW Government’s commitment to end people smuggling in NSW.

Anti-Slavery Australia submits that the Australian Government’s response to forced marriage must be developed in close consultation with the community and must include effective strategies to protect people who have been, or are at risk of being, forcibly married. The submission recommends that Australia develops a hybrid civil and criminal legislative response to fulfil its obligations under international law.

This submission highlights the shortcomings of the people trafficking offences set out in the Criminal Code Act 1995 (Cth). It also addresses the need for a holistic response to people trafficking, beyond the criminal justice system and law enforcement, which includes a visa framework and compensation scheme for victims.

Proposal outlining the need for a national compensation scheme for victims of trafficking, drawing attention to Australia’s international reparation obligations and recommending that a working party be formed to investigate the creation of a federal scheme.

Burn, JM 2013, 'Cracking down on slavery and human trafficking in NSW', The Conversation AU.

This article outlines the findings of the NSW Community Relations Commission report on human trafficking, raising the profile of modern forms of slavery such as forced labour or forced marriage.

Australia, Anti-Slavery, and Popular Culture, 1890 to the present

Labour Rights for Women and Girls: An Evidence Review and Performance Framework

Preparation of a Report on the Trafficking of Women Into Australia

The Admission and Exclusion of Asylum Seekers: The Search for Legitimate Parameters