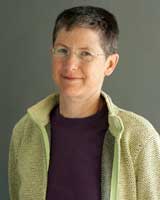 Jay Rutovitz has worked in renewable energy and energy efficiency since 1994. Prior to that, she worked as an electrical contractor for 15 years, before gaining a first class degree in Environmental Science. After working in the UK as energy coordinator for a large metropolitan council, a renewable energy consultant, and a science campaigner for Greenpeace UK, Jay came to Australia in 2001 and has since worked as an energy consultant to government, environment groups, and the private sector.
Jay was the main author for the NSW Bioenergy Handbook in 2004, which identified more than 1000 MW that could be harnessed from wastes on farms, in food production and in cities. In addition, the Handbook outlined technological, logistical and environmental considerations relating to bioenergy.
Jay was also the lead consultant on Energy Smart Urban Solutions, a major case study of low energy development in Western Sydney, and has continued to advise on low energy urban development. She developed the Green Electricity Watch survey methodology and undertook data collection, analysis and reporting on behalf of a consortium of environment groups from 2005 to 2007.
Jay has particular expertise in energy sector employment modelling, and has undertaken scenario modelling for Greenpeace International, the Climate Institute, Environment Victoria, and the Electrical Trades Union and National Electrical and Communications Association.
Since joining the Institute for Sustainable Futures in 2008, Jay has been a key researcher on energy projects. These include: the Intelligent Grid project for CSIRO, undertaking a case study of the NSW electricity supply to 2020 and developing the first iteration of the Details and Cost of Distributed Energy model (DCODE); employment modelling of global and regional low carbon energy scenarios; a range of distributed energy options research projects such as the Parkes Distributed Energy Plan; and most recently a study of the potential network benefits of Concentrating Solar Power, for which Jay was lead researcher. Jay continues to consult to the private sector.

Current charging methods for network infrastructure and recompense for distributed energy may not result in optimum system solutions. Once feed-in tariffs to support the development of renewable generation are phased out, the payment for grid exports is usually based on the wholesale energy value alone. Network charges are generally levied in full, with few attempts to offer a partial charge, or completely waived. Local Electricity Trading (LET) and Local Network Credits (LNCs) offer one approach to reforming charge structures. This paper examines the effects of LET and LNC on different stakeholders in four virtual trials of medium scale distributed generation projects around Australia, and the implications for policy. The trials found the large value gap between behind the meter systems and grid exports may lead to duplication of network assets, inefficient sizing and operation of distributed generators, and a lack of incentive for dispatchable generators to operate at peak times. The trials indicated that in most circumstances, the combination of LNC and LET addresses all four problems identified to some degree.

In 2014 the first edition of the online Guide was produced by TEC and Greenpeace, using earlier ISF research as one of main the inputs to the ranking criteria. The Guide ranked 20 retailers against 7 criteria and has been visited by over 100,000 people.

In 2015, ISF was contracted to update the Guide's methodology and rankings. The cost of the work was partly funded by an Advocacy grant from Energy Consumers Australia. In addition, ISF, TEC and Choice all contributed in-kind support to the project. ISF reviewed the 2014 Guide criteria and rankings, and then conducted background research to identify additional criteria and sub-criteria to expand the 2015 Guide to more comprehensively assess the 'green' credentials of Australia's electricity retailers.

ISF developed a survey for retailers to capture the required information for the rankings. Information provided by retailers was then supplemented by and verified against desktop research of company websites, company reports and public reports conducted in September 2015. Each retailer's data was assessed and scored, to determine a final score and ranking for 2015. The rankings are available online at www.greenelectricityguide.com.au

This report provides an overview of current literature and information relating to local network charges, local electricity trading (also called virtual net metering or VNM), and virtual power stations. The focus is information particularly relevant to Australia, as well as global precedents in each area.

The paper is prepared as part of an Australian Renewable Energy Agency (ARENA) funded research project led by the Institute for Sustainable Futures (ISF) at the University of Technology Sydney (UTS), Facilitating Local Network Charges and Virtual Net Metering and a project funded by the Victorian Government Department of Environment, Land, Water and Planning (DELWP), Virtual Renewable Power Stations. A key task in the ISF project is to run five virtual trials of Local Electricity Trading (LET)1 and local network charges, one of which will take place in the Moira Shire and Swan Hill Rural City Council areas in regional Victoria. The Moira and Swan Hill trial will examine either the business model for a one-to-many (Community Power Station) or for a many-to-one (also called a Virtual Power Station, or VPS). Both of these models are likely to be enabled if Local Electricity Trading becomes commonly available. The primary interest of the Councils is to improve the resilience of the local economy by retaining energy spending within the area, to increase the capacity of local renewable energy generation and to enable local residents and businesses to participate in the renewable energy generation. The purpose of this paper is to assist the Councils to choose which model to take forward into a trial.

Parkes Shire Council (PSC) is investigating the options to reduce energy use and generate local energy from renewable or low carbon sources, with the aim of delivering significant financial and environmental benefits. To this end, PSC commissioned the Institute for Sustainable Futures to produce a Distributed Energy Plan to form part of PSCs Sustainable Water and Energy Plan (SWEP). ISF undertook a high level assessment of the energy options by assigning indicative costs and comparing them with projected increases in NSW electricity prices, and assessing risks and benefits in the Parkes context. Six options were selected for further investigation in consultation with PSC. Implementing the proposed Distributed Energy Plan could provide significant economic, social and environmental benefit to both PSC and the wider Parkes community, enabling PSC to invest more in other essential community services and programs. It will directly reduce councils own emissions and costs, and increase the profile of sustainable and low carbon technologies. An important element of the plan is to ensure that the Parkes community is informed about the energy actions implemented, enabling businesses, organisations and residents to learn from the Councils experience. There may be potential in the future to facilitate community implementation of distributed energy, for example by arranging or facilitating bulk purchase cooperatives, so that residents can gain access to the same cost effective solutions as PSC itself.

This report discusses twelve reform options that would drive or support a step-change improvement in energy efficiency in Australia by 2020. The reform options are a mix of policy, structural and regulatory reform.

The Energy [R]evolution scenario published by Greenpeace International and the European Renewable Energy Council sets out a vision for a low-carbon energy future for South Africa (RSA) and compares it to a scenario derived from the International Energy Agency (IEA) 2007 energy projection for Africa (IEA 2007) the `IEA Reference case. The South African Government has also published a set of energy scenarios, including a `Growth Without Constraints (GWC) scenario1, which is commonly regarded as a reference case for the country. The GWC scenario was designed to reflect South Africas energy future in the absence of climate change, with no oil constraints, and if no effort was made to internalise externalities (Scenario Building Team 2007). This report presents an analysis of the energy sector job creation associated with the three scenarios to 2030: the Energy [R]evolution, the IEA Reference case, and the Growth Without Constraints scenario. Only direct employment is calculated, including jobs in fuel production, manufacturing, construction, and operations and maintenance. Energy efficiency jobs associated with reducing the need for electricity, and jobs associated with coal exports are also calculated.

Greenpeace International and the European Renewable Energy Council published a global energy scenario, Energy [R]evolution, that sets out a vision for low-carbon global energy supply and compares it to the energy projection put forward by the International Energy Agency (IEA 2007). This report presents an analysis of the potential job creation associated with the two scenarios to 2030. Only direct employment associated with electricity production is calculated, including jobs in fuel production, manufacturing, construction, and operations and maintenance. Results are presented for the regions used in both the IEA and Greenpeace projections, namely OECD North America, OECD Europe, OECD Pacific, Africa, Latin America, Middle East, Developing Asia, the Transition Economies, India, and China. Additional detail is given for the G8 countries and the European Union. There have been many reports in recent years attempting to analyse local, national, or regional job effects of energy scenarios and energy policy. This is the first report that attempts to systematically analyse global job impacts of a low-carbon energy future.

Communities in developed nations expect their governments to ensure the reliable supply of electricity. Reflecting these expectations, the NSW Government established an Inquiry into Electricity Supply in NSW in 2007, chaired by Professor Anthony Owen (the Owen Inquiry). This Inquiry was asked in particular to review the need and timing for new baseload supply. The Owen Inquiry concluded that there was a potential shortfall in baseload supply from 2013/14, and recommended that planning for new power stations should commence immediately as the lead time for a coal-fired power station could be 67 years. Since the Owen Inquiry, the projections for both electricity consumption and electricity generation have been modified significantly (Transgrid 2008), such that the findings of the Inquiry warrant substantial reconsideration. It is beyond the scope of this report to review the merits of the privatisation plan proposed by the Owen Inquiry. However, it may well prove fortuitous for NSW that the Owen Inquirys recommendations were not adopted, as this means there is an opportunity to reconsider the options for securing the states electricity future.