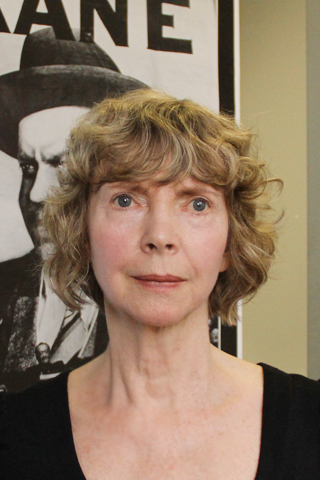 Associate of the Faculty, School of Communication

Helen Macallan worked as a television floor manager in New Zealand in the 1970s. She studied film and media in Sydney in the early 1980s when she was involved in the thriving independent film production and culture of that period. She holds a BA (Communication) from the New South Wales Institute of Technology (now UTS) and a PhD from the University of Technology, Sydney. Until 2005 she was a Senior Lecturer in Film Studies and Media, the School of Language and Media, The University of Newcastle, Australia. She is currently a research associate with the Creative Practices group at the University of Technology, Sydney. Her writing (essays, interviews and criticism) has been published in a number of journals, including the literary journal, Heat and the online film journal, Senses of Cinema. She is also an independent filmmaker.

Helen was the principal investigator for the 'Pommy Town project', a large cultural history research project on memory, place and cultural change in Newcastle, Australia. It examined the relationship between industry and community, and in particular the nature of the configuration formed by the unique intermeshing of social and work relationships that occurred in the workers' estate set up by the English steel manufacturer John Lysaght in Newcastle in the early 1920s.

A cross-disciplinary project funded by a SPIRT collaborative grant (BHP and the University of Newcastle) the Pommy Town project research outcomes include the following: the establishment of a large audio-visual archive which is currently being digitised and which shall be held by The University of Newcastle library, the documentary Mapping a Community: Memories of the Early Years in Pommy Town which was commissioned by BHP for the 'Ribbons of Steel' cultural event that marked the closing down of the company's Newcastle operations and the video Salute to Steel City which was exhibited at Loop Space gallery, Newcastle, April 25 - May 9 2009. It also includes the publication by The University of Newcastle and William Michael Press of a self-illustrated manuscript by former steelworker, William R. Claridge (The Pommy Town Years: Memories of Mayfield and Other Tales of the Twenties).

Helen was involved in a number of collaborative research projects with the Australian film sound designer, Andrew Plain, until Andrew's death in 2013. Salute to Steel City is an example of their work as is the chapter 'Filmic Voices' in the MIT publication Voices: Vocal Aesthetics in Digital Arts and Media (2010). See also the Senses of Cinema essay Hidden's Disinherited Children (opens an external site). Helen is continuing the research which she and Andrew had begun on the ways in which historical and contemporary war and anti-war films (and those which hedge their bets by vacillation between the two perspectives) use sound and image to present their narratives.