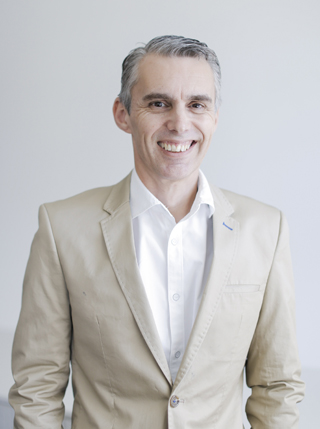 Derek joined UTS as a Visiting Fellow in August 2014 and is now Co-Director of the Centre for Media Transition. CMT is an interdisciplinary initiative of the Faculty of Law and the Faculty of Arts and Social Sciences, launched in July 2017.

Before this, he worked for the Australian Communications and Media Authority where he managed the implementation of the federal government’s media ownership reform package and the resulting commercial transactions. He also managed the ACMA’s monitoring and compliance activities on disclosures rules for commercial radio, as well as other content rules such as the anti-siphoning sports list, pay TV drama expenditure and the anti-terrorism standards for narrowcast television.

Derek finished his time at the ACMA by managing an operational policy team dedicated to complex regulatory problems spanning the legal and engineering spheres, including the transition to digital television.

From 2000 to 2005 Derek was the Director of the Communications Law Centre at UNSW. He taught media and communications regulation, conducted research and led the Centre’s policy work on issues such as media diversity, cash for comment and telecommunications consumer protection. He has also worked for the Office of Film and Literature Classification and the Media, Entertainment and Arts Alliance.

As governments around the world struggle to find appropriate ways of regulating the activities of digital platforms, a form of "guided self regulation" seems to be emerging, with voluntary codes governing aspects such as the spread of disinformation as well as commercial relations between publishers and platforms.
Reliance on industry schemes is not a new phenomenon. In Australia, as in other jurisdictions, governments have long recognised that in the right circumstances, self-regulation offers a pragmatic and effective alternative to the various forms of government regulation.1 However, an aspect that has received little attention is the extent to which self-regulatory schemes involve consumers and citizens in the development of codes of practice and other rules.
As one of the authors has previously argued, consultation with citizens and consumers is expected of industry regulators; it should be regarded as a feature of legitimacy and responsiveness on the part of industry schemes, especially when governments effectively delegate rule-making responsibility to them.2
In new research completed at the end of 2019,3 we surveyed the engagement practices - a collective term we use to describe various forms of consumer and citizen involvement4 - of 19 industry schemes operating in the advertising, media, telecommunications and online sectors in Australia. Our research produced an interesting result: at least some of the self-regulatory industry schemes perform better when engaging consumers and citizens in rule-making than the co-regulatory
schemes.

Reform of Australia's media ownership rules has been under discussion for several years, with at least some aspects supported by the previous Labor governments as well as by the Turnbull Liberal government.

The prank call in 2012 by two Sydney radio presenters who tried to speak to the Duchess of Cambridge was followed by the death of nurse Jacintha Saldanha. The prank prompted a long-running investigation by Australia's broadcasting regulator, the Australian Communications and Media Authority, into the decision to record and broadcast, without consent, conversations with Ms Saldanha and another nurse. In a unanimous decision, the High Court of Australia has held the ACMA did not require a prior decision of a court in order to find the licensee, Today FM, committed an offence under surveillances devices legislation. This has cleared the way for the ACMA to find Today FM breached a condition of its licence. With the investigation report now on the public record and the ACMA contemplating enforcement action, the matter reveals deficiencies in the industry-based codes of practice.

In response to Minister Helen Coonan's discussion paper on media reform released in March, the authors survey the recent history of media ownership policy with particular reference to the Productivity Commission's visionary 2000 report on broadcasting. They argue that the present proposals fall short of the plan laid out in this report and are premature pending further development of digital media.

Wilding, D 2005, 'In the Shadow of the Pyramid: Consumers in communications self-regulation', Telecommunications Journal of Australia, vol. 55, no. 2, pp. 37-57.

The consumer driven communications (CDC) project focused attention on consumer participation in regulation. The project applied the concept of the regulatory pyramid to explore options for consumer participation at all levels of regulation. It explores ways of bringing consumers out from the shadow of the regulatory pyramid. There are good reasons advanced by legal theorists for why a self-regulatory scheme, correctly designed and operated, should be more efficient than direct intervention by the regulator.

Over the past year media ownership and control have been at the forefront of media policy debates in the United States and the United Kingdom. In Australia, the Media Ownership Bill was debated — and defeated in the Senate — in the last week of June. The Bill seeks to remove many of the regulations on ownership and control in the Australian media. It is expected to return to the Senate later this year and has been lipped as one of the handful of triggers for a double dissolution. In this article Derek Wilding provides an outline of the Bill following a number of recent amendments, as well as the key policy issues and points of contention in this long-running debate on diversity, convergence and media influence.

The report was commissioned by the Australian Competition and Consumer Commission as part of its Digital Platforms Inquiry. The inquiry has been described as a world-leading investigation into the effects of digital search engines, social media platforms and other digital content aggregation platforms on competition in media and advertising services markets.

To assist the ACCC, the CMT was commissioned to research aspects concerning news and journalistic content. This included the function of journalism, effects of technology and how to consider quality and choice.

Wilding, D 2019, 'Defamation in the Digital Age has Morphed into Litigation between Private Individuals', The Conversation.

Wilding, D & Fray, P 2019, 'Impact of the exercise of law enforcement and intelligence powers on the freedom of the press: Submission to the Parliamentary Joint Committee on Intelligence and Security', Centre for Media Transition, Sydney.

The Competition and Consumer Commission is worried about the ability of the platforms we use to determine the news we read.

Wilding, D & Molitorisz, S 2019, 'The Law is Closing in on Facebook and the "Digital Gangsters"', The Conversation.

Submission to Department of Communications and the Arts, November 2016 on review of funding for consumer representation grants.

Submission to the Senate Environment and Communications Legislation Committee

Submission to the Australian Communications and Media Authority

Wilding, D 2016, 'The Scandal of 60 Minutes: No Broadcasting Standards, No Investigation'.

Submission to Department of Communications and the Arts

Submission to Department of Communications and the Arts

Falling in Love Again: What will it take for audiences to trust news media