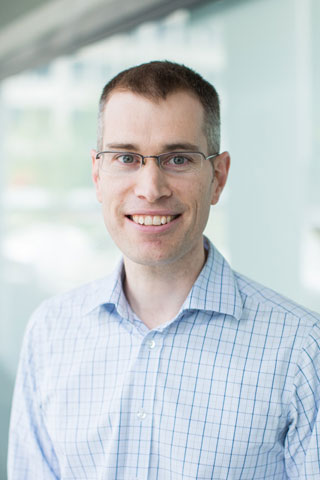 David has worked as a clinical psychologist in a variety of community-based and inpatient mental health settings since 2001, and he has particular experience in the treatment of anxiety disorders. He has conducted numerous research projects in clinical settings and was a Senior Research Fellow in trauma and mental health in the School of Psychiatry UNSW and St John of God Health Care - Richmond hospital before commencing his current role.

His research aims to optimise treatment outcomes for people with posttraumatic and anxiety disorders by focusing on the translation of research findings to routine clinical practice.

BA(Hons) Sydney, MPsychol(Clin) UNSW, PhD UNSW. David is currently a National Health and Medical Research Council (NHMRC) Early Career Fellow and in recent years has been a chief investigator of numerous projects funded by the Australian Research Council (ARC) and Australian Rotary Health. He is an endorsed clinical psychologist and supervisor with the Psychology Board of Australia and also supervises postgraduate research projects.

He is an associate editor of the International Journal of Mental Health and Addiction and BMC Psychiatry and he is a member of numerous professional organisations including the Australian Clinical Psychology Association and the International Society for Traumatic Stress Studies.

Aims. Evidence suggests that the psychosocial adjustment of children of refugees may be compromised when a parent has symptoms of posttraumatic stress disorder (PTSD). We sought to determine whether trajectories of parental PTSD symptoms might relate to child adjustment and whether there is an additive effect when both, as opposed to just one parent, has prominent PTSD symptoms. Method. We report data from the first three years of a prospective study of recent Australian humanitarian migrants: the Building a New Life in Australia study. Parental PTSD symptoms were assessed on three occasions and Latent Class Growth Analysis was used to identify homogenous groups of parents based on their PTSD symptoms. The Strength and Difficulties Questionnaire was administered to assess child psychosocial adjustment. Regression analyses were then conducted to determine whether trajectories of parental PTSD symptoms predicted child adjustment. Results. Regression analyses suggested that, after controlling for child age and gender, the presence of either one or both parents with persistently high PTSD symptoms was associated with children having greater emotional difficulties and poorer overall psychosocial adjustment. Children with both parents with persistently high PTSD had higher levels of emotional difficulties than children with a single parent with high PTSD symptoms. Conclusion. For emotional difficulties, though not other domains of child psychosocial adjustment, there indeed appears to be an “additive” impact of having two, rather than just one parent with persistently high PTSD symptoms. The clinical and service provision implications of these findings are discussed.

© 2020, Springer Nature Switzerland AG. Purpose of Review: Cyberchondria is a problematic, i.e. distressing or anxiety-increasing pattern of online health information seeking. The development of psychometrically sound instruments for the assessment of cyberchondria is imperative for better understanding of this construct. The aim of the present article is to provide a systematic literature review of cyberchondria instruments. Recent Findings: Although several measures of cyberchondria have been developed, the Cyberchondria Severity Scale (CSS) has been used most often. The CSS is based on a solid theoretical framework, with very good to excellent reliability and validity. It has been translated into several languages. Modifications of the original version of the CSS have been introduced to refine its conceptual foundation and improve its utility by making it shorter. Summary: Further improvement of the CSS may boost the quality of cyberchondria research. There remains a need to test the theoretical underpinnings of the CSS and consider alternative models of cyberchondria.

Stavropoulos, A & Berle, D 2020, 'The influence of ruminative processing mode on the trajectory of intrusive memories following a negative mood induction', JOURNAL OF BEHAVIOR THERAPY AND EXPERIMENTAL PSYCHIATRY, vol. 68.View/Download from: Publisher's site

Background
Cyberchondria refers to an abnormal behavioral pattern in which excessive or repeated online searches for health-related information are distressing or anxiety-provoking. Health anxiety has been found to be associated with both online health information seeking and cyberchondria. The aims of the present systematic review and meta-analysis were to examine the magnitude of these associations and identify any moderator variables.

Background: The vast majority of the world’s refugees and people seeking asylum live in a state of sustained displacement. Little is known, however, about the mental health impact of prolonged insecurity.

Objective: This study aimed to investigate the association between insecure visa status and mental health, suicidality, disability and social engagement in a sample of refugees and asylum-seekers living in Australia

Conclusion: Findings highlight the negative mental health consequences of living in a state of protracted uncertainty for refugees and people seeking asylum, and the key role of social engagement in influencing mental health amongst insecure visa holders. Results also underscore the importance of designing and implementing policies and services that facilitate improved mental health for those with visa insecurity.

Piper, A & Berle, D 2019, 'The association between trauma experienced during incarceration and PTSD outcomes: A systematic review and meta-analysis.', Journal of Forensic Psychiatry and Psychology, vol. 30, no. 5, pp. 854-875.View/Download from: Publisher's site

Methods
Participants (N = 124) completed the PTSD Checklist, the Depression and Anxiety Stress Scales and the Personal Wellbeing Index at the start and end of a 4-week Trauma Focused CBT residential program, as well as 3- and 9-months post-treatment.

Results
Personal wellbeing improved significantly across the 9-months of the study. Generalised estimating equations analyses indicated that (older) age and improvements in PTSD and depressive symptoms were independent predictors of personal wellbeing across time.

The construct of dysphoria has been described inconsistently across a broad range of psychopathology. The term has been used to refer to an irritable state of discontent, but is also thought to incorporate anger, resentment and nonspecific symptoms associated with anxiety and depression, such as tension and unhappiness. The Nepean Dysphoria Scale has been developed to allow assessment of dysphoria, but its factor structure has not yet been investigated in clinical samples. We aimed to determine the latent structure of dysphoria as reflected by the Nepean Dysphoria Scale, using a clinical sample. Adults (N = 206) seeking treatment at a range of mental health services were administered the Nepean Dysphoria Scale. Four putative factor structures were investigated using confirmatory factor analysis: a single-factor model, a hierarchical model, a bifactor model and a four-factor model as identified in previous studies. No model fit the data except for a four-factor model when a revised 22-item version of the original 24-item scale was investigated. A four-factor structure similar to that identified in non-clinical samples was supported, albeit following the removal of two items. The Nepean Dysphoria Scale appears to have utility for the assessment of dysphoria in routine clinical settings.

Starcevic, V, Monti, MR, D'Agostino, A & Berle, D 2013, 'Will DSM-5 make us feel dysphoric? Conceptualisation(s) of dysphoria in the most recent classification of mental disorders', AUSTRALIAN AND NEW ZEALAND JOURNAL OF PSYCHIATRY, vol. 47, no. 10, pp. 954-955.View/Download from: Publisher's site

This case study outlines the use of graded in-vivo exposure to reduce an aversion to cockroaches in an older male. Following assessment, seven therapy sessions of in-vivo exposure were conducted where the client was progressively brought into closer and closer contact with cockroaches. A decrease in the client's aversion to cockroaches was apparent at posttreatment and persisted to 5-month follow-up, as evidenced by client reports and decreased behavioral avoidance. The client maintained that his avoidance had been driven by disgust, rather than fear, and the reduction of his avoidance of and aversion to cockroaches indicates that approaches developed for fearful clients may also be effective for clients who do not report fear responses to their avoided stimuli. © 2007 Sage Publications.

Berle, D 2003, 'The influence of withdrawal symptoms and catastrophic thinking on smokers' self-efficacy', Addictive Disorders and their Treatment, vol. 2, no. 3, pp. 97-104.View/Download from: Publisher's site

Many descriptions and formulations of Post Traumatic
Stress Disorder have presented trauma as an experience of
intense threat-fear-terror that can (for some) cause lasting
psychological injury. This does not capture the full range of
traumatising experience that we see clinically and some people do
not respond to treatments designed to address fear-threat-terror.
We are therefore incorporating the growing literature on moral injury
and the valuable model of psychosocial pillars into a more inclusive
pathways model that highlights the significance of experiences of
horror-shock-injustice-guilt in traumatic injury and the need for
this to be accounted for in treatment. We believe that broadening
our conceptualisation of PTSD in these ways will serve to better
inform the provision of services for people with PTSD as well as
help to articulate what clinicians have always implicitly understood.

Understanding relapse in posttraumatic stress disorder: An investigation of return of fear