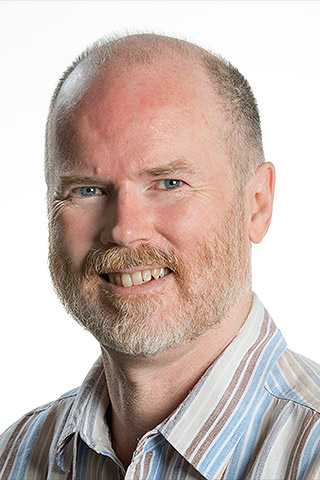 Associate Professor Barry Jay is a member of the School of Software at the University of Technology, Sydney. He obtained his BSc (Hons, pure mathematics) from the University of Sydney (1980) and his PhD(mathematics) from McGill University, Montreal (1984). He learned about computing as a senior research fellow at the Laboratory for the Foundations of Computer Science in Edinburgh before moving to UTS in1993. He served a term as Associate Dean for Research.

proofs in Coq and associated pdfs

In 1990s he developed the theory of shaped data structures  which underpins his language FISh. In 2000s he developed pattern calculus which underpins the bondi programming language, as explained in his monograph "Pattern Calculus" (Springer, 2009).  In 2010s he is developing a general theory of intensional computation, in which the generic queries of pattern calculus are generalised to include program analyses that are written in the source language, without any need for encoding. Recently, he has been verifying his proofs using he Coq theorem-prover, and uploading them to GitHub.

Jay, B 2009, Pattern Calculus: Computing with Functions and Structures, Springer.View/Download from: UTS OPUS

© 2019 Elsevier B.V. Intensional computations are those that query the internal structure of their arguments. In a higher-order setting, such queries perform program analysis. This is beyond the expressive power of traditional term rewriting systems, such as lambda-calculus or combinatory logic, as they are extensional. In such settings it has been necessary to encode or quote the program before analysis. However, there are intensional calculi, specifically confluent term rewriting systems, that can analyse higher-order programs within the calculus proper, without quotation; there are even programs that produce the Goedel numbers of their program argument. This paper summarizes the current situation. Highlights include the following observations. We have known since 2011 that the simplest intensional calculus, SF-calculus, supports arbitrary queries of closed normal forms, including equality, pattern-matching, searching and self-interpretation. Recent work, verified using the Coq proof assistant, has shown that all recursive programs can be represented as closed normal forms in SF-calculus, and even in combinatory logic. Thus, we can here deduce that SF-calculus (but not combinatory logic) can define queries of programs. These results are compatible with direct support for lambda-abstraction. Although these results conflict with the traditional understanding of expressive power of combinatory logic and λ-calculus, as developed by Church and Kleene, our recent publication has shown that their approach is compromised by its reliance on encodings. To drive the point home, this paper uses a non-standard encoding to lambda-define a trivial solution of the Halting Problem.

Intensional lambda-calculus adds intensional combinators to lambda-calculus to facilitate analysis. In particular, they are used to factorise data structures and programs into their components, which can be used to convert abstractions into combinators. This paper shows how to type an intensional lambda-calculus using no more than the types of System F. Even the quotation function used to access program syntax can be defined and typed, as can its inverse: the calculus supports typed self-quotation. Thus, one may freely alternate between program analysis and program execution. Proofs of all results have been verified in Coq.

Abstract A function on some domain is -definable if the corresponding function of -terms is so definable. However, the correspondence is parametrized by a representation of the domain. Often there is a natural choice of representation, but when the domain consists of -terms then they can be represented by either themselves or by the Church numeral of their G�del number. This choice determines whether or not all computable functions are -definable.

Jay, B 2016, 'Programs as Data Structures in $\l SF$-Calculus', Proceedings of MFPS XXXII.View/Download from: UTS OPUS

Abstract Lambda-SF-calculus can represent programs as closed normal forms. In turn, all closed normal forms are data structures, in the sense that their internal structure is accessible through queries defined in the calculus, even to the point of constructing the Goedel number of a program. Thus, program analysis and optimisation can be performed entirely within the calculus, without requiring any meta-level process of quotation to produce a data structure. Lambda-SF-calculus is a confluent, applicative rewriting system derived from lambda-calculus, and the combinatory SF-calculus. Its superior expressive power relative to lambda-calculus is demonstrated by the ability to decide if two programs are syntactically equal, or to determine if a program uses its input. Indeed, there is no homomorphism of applicative rewriting systems from lambda-SF-calculus to lambda-calculus. Program analysis and optimisation can be illustrated by considering the conversion of a programs to combinators. Traditionally, a program p is interpreted using fixpoint constructions that do not have normal forms, but combinatory techniques can be used to block reduction until the program arguments are given. That is, p is interpreted by a closed normal form M. Then factorisation (by F) adapts the traditional account of lambda-abstraction in combinatory logic to convert M to a combinator N that is equivalent to M in the following two senses. First, N is extensionally equivalent to M where extensional equivalence is defined in terms of eta-reduction. Second, the conversion is an intensional equivalence in that it does not lose any information, and so can be reversed by another definable conversion. Further, the standard optimisations of the conversion process are all definable within lambda-SF-calculus, even those involving free variable analysis. Proofs of all theorems in the paper have been verified using the Coq theorem prover.

Concurrent pattern calculus drives interaction between processes by unifying patterns, just as sequential pattern calculus drives computation by matching a pattern against a data structure. By generalising from pattern matching to unification, interaction becomes symmetrical, with information flowing in both directions. This provides a natural language for describing any form of exchange or trade. Many popular process calculi can be encoded in concurrent pattern calculus. © IFIP International Federation for Information Processing 2010.

The constructor calculus supports generic operations defined over arbitrary data types including abstract data types. This paper extends the basic constructor calculus to handle constructed locations. The resulting calculus is able to define a generic assignment operation that performs in-place whenever appropriate and allocates fresh memory otherwise. This approach may eliminate many of the space overheads associated with higher-order polymorphic languages. In combination with existing generic programming techniques it can express some very powerful algorithms such as the visitor pattern.

© 2019 Association for Computing Machinery. Closure calculus is simpler than pure lambda-calculus as it does not mention free variables or index manipulation, variable renaming, implicit substitution, or any other meta-theory. Further, all programs, even recursive ones, can be expressed as normal forms. Third, there are reduction-preserving translations to calculi built from combinations of operators, in the style of combinatory logic. These improvements are achieved without sacrificing three fundamental properties of lambda-calculus, being a confluent rewriting system, supporting the Turing computable numerical functions, and supporting simple typing.

Recursive programs can now be expressed as normal forms within some rewriting systems, including traditional combinatory logic, a new variant of lambda-calculus called closure calculus, and recent variants of combinatory logic that support queries of internal program structure. In all these settings, partial evaluation of primitive recursive functions, such as addition, can reduce open terms to normal form without fear of non-termination. In those calculi where queries of program structure are supported, program optimisations that are expressed as non-standard rewriting rules can be represented as functions in the calculus, without any need for quotation or other meta-theory.

The bondi programming language is multi-polymorphic, in that it supports four polymorphic programming styles within a small core of computation, namely a typed pattern calculus. bondi's expressive power is illustrated by considering the problem of assigning reviewers to a paper. As the context generalises from a committee to a committee with additional reviewers, to a conference, to a federation or confederation, the solution incorporates polymorphism familiar from the functional, generic functional, relational, path-based, and object-oriented programming styles, respectively. These experiments show that multi-polymorphic programming is both practical and desirable. Copyright © 2013 ACM.

Self-interpreters can be roughly divided into two sorts: self-recognisers that recover the input program from a canonical representation, and self-enactors that execute the input program. Major progress for statically-typed languages was achieved in 2009 by Rendel, Ostermann, and Hofer who presented the first typed selfrecogniser that allows representations of different terms to have different types. A key feature of their type system is a type:type rule that renders the kind system of their language inconsistent. In this paper we present the first statically-typed language that not only allows representations of different terms to have different types, and supports a self-recogniser, but also supports a selfenactor. Our language is a factorisation calculus in the style of Jay and Given-Wilson, a combinatory calculus with a factorisation operator that is powerful enough to support the pattern-matching functions necessary for a self-interpreter. This allows us to avoid a type:type rule. Indeed, the types of System F are sufficient. We have implemented our approach and our experiments support the theory. Copyright © 2011 ACM.

Jay, B & Vergara, J 2011, 'Growing a Language in Pattern Calculus'.View/Download from: UTS OPUS

Research on security techniques for Java bytecode has paid little attention to the security of the implementations of the techniques themselves, assuming that ordinary tools for programming, verification and testing are sufficient for security. However, different categories of security policies and mechanisms usually require different implementations. Each implementation requires extensive effort to test it and/or verify it.We show that programming with well-typed pattern structures in a statically well-typed language makes it possible to implement static byte-code verification in a fully type-safe and highly adaptive way, with security policies being fed in as first-order parameters, reduces the effort required to verify security of an implementation itself and the programming need for new policies. Also bytecode instrumentation can be handled in exactly the same way. The approach aims at reducing the workload of building and understanding distributed systems, especially those of mobile code.

Past work on the semantics of vectors and arrays provides a denotational semantics for the new, higher-order, polymorphic array programming language FISh, that uses static analysis to determine array shapes. This semantics will be combined with that of shape polymorphism to underpin a language that will support both shape analysis and shape polymorphism on both arrays and inductive types. ©1999 Published by Elsevier Science B. V.

Jay, CB 1993, An introduction to categories in computing, no. UTS-SOCS-93.9, University of Technology, Sydney.

Jay, B 2017, 'Beyond Lambda-Calculus: Intensional Computation'.

Jay, B 2017, 'Intensional-computation, repository of proofs in Coq'.

Jay, B 2017, 'Typed LambdaFactor Calculus repository of proofs in Coq'.

Jay, B 2005, 'Pattern matching against functions'.