A breath of fresh air

Sydney company Junglefy is increasing opportunities for living infrastructure innovation by combining their industry expertise with the technical know-how of UTS researchers. 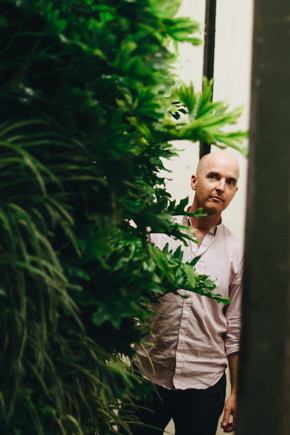 Junglefy is well known for covering the city in plants — in particular, for the construction and maintenance of the the eye-catching exterior of the award-winning One Central Park building on Broadway.

When it came to their latest invention — the Breathing Wall, a green wall foliage system for indoor and outdoor environments — Junglefy co-founder Jock Gammon was keen to demonstrate that the product’s ability to improve the local environment went well beyond aesthetics.

To do this, Gammon approached researchers in the UTS Plants and Environment Quality Research Group for help quantifying the Breathing Wall’s built-in pollutant removal capabilities.

“For us, it was a strategic business decision to make sure that our Breathing Wall claims could be quantified and justified by an academic institution,” says Gammon.

“We had an idea of what the Breathing Wall could achieve but we wanted a research institution to prove it.”

The initial aim of the research was to demonstrate that the Breathing Wall was actually improving indoor air quality. Research leader Dr Fraser Torpy and his team assessed the system’s ability to remove carbon dioxide and volatile organic compounds or VOCs from the air, achieving positive results across the board.

Over the course of this work, Gammon and Torpy realised that the Breathing Wall might also be uniquely placed to fight toxic particulate matter from sources such as diesel exhaust and dust. Further studies proved their theory, opening the door to new markets for the Junglefy team.

“For Jock, having his system in a very competitive market so strongly credentialed with research puts him head and shoulders above the competition,” says Torpy.

For the UTS researchers, working with industry presents a unique opportunity to deliver novel solutions to real-world challenges.

“With Jock, it’s our job to give him what he needs to make this phenomenal product real, and start making a real difference to building energy use and people’s health,” Torpy says.

The Junglefy Breathing Wall was awarded Best In Category for Commercial and Industrial Product Design at the 2017 Good Design® Awards.

According to the jury, “We were blown away by the modularity and versatility of the wall and its components. This is a beautiful example where nature, technology and elegant interior architecture are all seamlessly blend into each other."

Next steps include making the Breathing Wall competitive with world-standard air filtration systems, and to develop similar technologies for pollution-heavy industrial environments.