Blockchain can help break the chains of modern slavery

There’s a good chance the device on which you are reading this contains cobalt. It’s an essential metal for batteries in phones and laptops. There’s also a chance the cobalt was mined by slaves.

Almost two-thirds of the cobalt mined around the world comes from the Democratic Republic of the Congo (DRC). The central African country has a notorious recent history of human rights abuses, including slave labour. 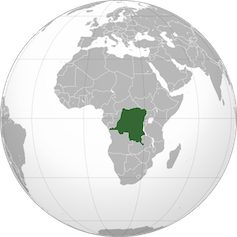 The Democratic Republic of the Congo highlighted in green. Connormah/Wikimedia Commons, CC BY-SA

Right now it is all but impossible to know if cobalt from the country is slave-free. It’s the same around the world for many other commodities, from tuna to coffee.

Some businesses see a solution in blockchain, the technology behind bitcoin, to verify global supply chains.

It is the latest promise for a technology that is touted as a solution for unregulated prison economies, climate change and counterfeiting. Maybe it will prove part of the solution. But we can’t put all our hopes on any technology solving a complex social problem.

Figuring out if goods are sourced and produced ethically gets increasingly difficult as supply chains become more complex.

In the case of cobalt, the supply chain can consist of countless middlemen who buy and mix cobalt from countless different mines. This means it is almost impossible for a cobalt buyer such as a battery maker to trace where the metal comes from.

The DRC’s cobalt industry encompasses a wide range of working conditions. Some miners are paid relatively well and work in safe conditions.

But around a fifth of the cobalt is dug up by about 110,000 to 150,000 workers in small “artisanal” mines. Those who work in this unregulated sector often earn a pittance and work in unsafe conditions.

Working in such mines includes descending into small hand-dug holes that defy even basic safety precautions. Poor construction and ventilation have led to injuries and deaths.

As sales of electric cars swells demand for cobalt, these conditions are worsening.

It is difficult to know exactly what proportion of the DRC’s cobalt industry uses slave labour. But a 2013 investigation by the Washington-based organisation Free the Slaves, found 866 of the 931 individuals interviewed in three mining communities were slaves.

The report identified seven types of slavery, including forced labour and debt bondage.

Almost one in four slaves was under 18 years of age. A 2014 report by UNICEF estimated 40,000 children were working in mines in DRC’s south, most of them digging cobalt.

It is not just cobalt. The same is true of everything from copper to cocoa. It is hard to know how products are made or where they are sourced from.

So how can we ensure supply chains are not tainted by modern slavery?

This is where companies are experimenting with blockchain technology. To understand their interest, let’s recap the basics of this technology.

Think of blockchain as an online public ledger. Once a transaction occurs, a permanent and unchangeable record of that transaction is created and has to be validated by others in the blockchain. These records are called “blocks” and are chained together chronologically. 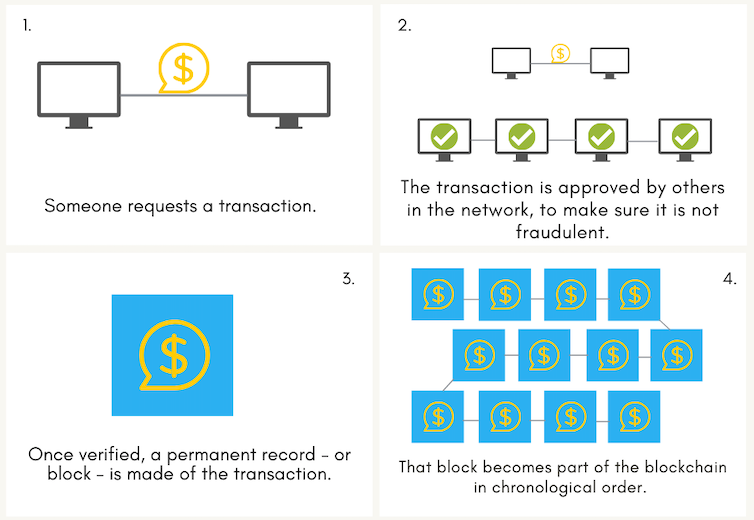 How blockchain technology works. The Conversation

Blockchain technology can therefore be used to create a verified and tamper-proof record of supply chains from source to end user.

The World Wildlife Fund is working with technology partners and a tuna fishing company to use blockchain technology to track tuna from “bait to plate”. A consumer will be able to find out when and where the tuna was caught by scanning a code on the packaging.

BHP wants to use it to verify copper supplies. Blockchain is also being used to track cotton, fashion, coffee and organically farmed products.

Ford and IBM are part of the consortium looking to use the technology to monitor cobalt supplies. It would mean the ability to track the metal from mine to battery. Ethically mined cobalt can be recorded in the blockchain and followed as it moves around the supply chain.

While blockchain is promising, we need to address several challenges if it is going to work.

A crucial element in any blockchain is the “consensus protocol”. This determines who gets to validate a transaction, whether it be all participants, a majority, a select few or a random selection. In a blockchain dedicated to ethical sourcing it is crucial that workers can attest to their working conditions. There is no guarantee this will happen, especially for marginalised or oppressed workers.

Second, it is important to know what standard for ethical sourcing a blockchain upholds. There are several blockchain platforms, so different, potentially less robust, standards could easily develop. This is an issue for other areas of ethical certification, where competing schemes for goods such as coffee exist.

Third, we should always question the link between a “block” and its material reality. Finding a way to insert goods made using slave labour into the blockchain would be highly lucrative. Since the integrity of blockchain data depends on humans, it is vulnerable to inaccuracies or fraud.

Fourth, blockchain may create a “digital divide”. Larger suppliers with technical experience will have less trouble using this technology, while smaller suppliers may be left out. We need to guard against blockchain becoming a barrier to small suppliers entering the market.

As a transparency tool blockchain can – in theory – give insights into where goods came from. But no technology on its own can solve a complex social problem.

Ultimately, as with any other technology, the saying “garbage in, garbage out” applies. If humans want to undermine accountability systems, they will find ways of doing so.

Just recording transactions is not enough. As part of a comprehensive agenda to tackle the myriad factors underlying modern slavery, though, it may prove a useful tool.