At last, the news that parents (and especially children) using the Blackfriars Children’s Centre have been waiting for – on-site work has begun!
As revealed previously in UTS:InProgress and U:mag, a new, purpose-designed childcare centre is to replace the current centre, with 34 additional childcare places and a host of exciting, child-friendly indoor and outdoor spaces when it opens in mid-2017.

Artist illustration of the new Blackfriars Children's Centre interior
After a short delay to the start of on-site activities, early June saw work begin on the first phase of the project, which involves construction of a new access pathway to the site from Buckland St, which will eventually replace the current access from Blackfriars St. Demolition of the demountable known as Building 21 is almost complete.

As you would expect, there have been a few changes on-site to accommodate the construction works.
With on-site drop-off/pick-up parking for the childcare centre now closed, families need to make other arrangements, including using alternative short-term parking in the surrounding streets. Their cooperation is much appreciated as we progress this exciting project. 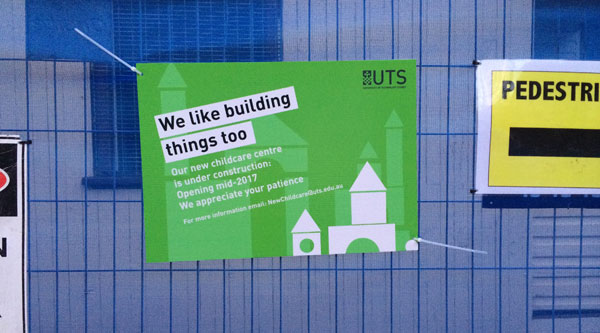 Demolition of Building 21 is underway behind the hoardings

Once the contractor is appointed for the main childcare centre works in late June 2016, more details of the timeline will be revealed. Watch this space!

For enquiries about the project or the contractor, please contact masterplan.feedback@uts.edu.au.