There are strong psychological drivers underpinning the impulse to splurge hard-earned money online. There are also some simple ways to stop. 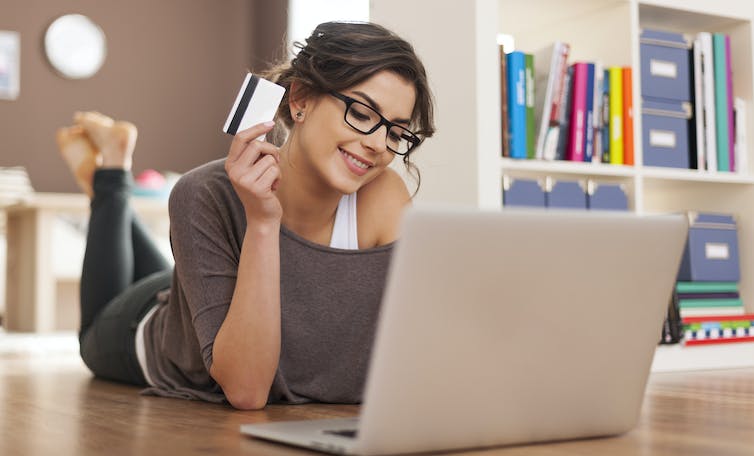 The demand for online shopping has obviously increased since COVID-19 restrictions were put in place.

But less obvious are the subtle psychological drivers behind our collective online shopping splurge. In fact, online shopping can relieve stress, provide entertainment and offers the reduced “pain” of paying online.

In the last week of April, more than two million parcels a day were delivered across the Australia Post network. This is 90% more than the same time last year.

More recently, data based on a weekly sample (from May 11-17) of transactions revealed food delivery increased by 230%, furniture and office goods purchases rose 140% and alcohol and tobacco sales rose 45%.

Meanwhile, we’ve seen thousands of retail job losses, with Wesfarmers announcing plans on Friday to close up to 75 Target stores around the country, and Myer finally reopening stores after nearly two months of closure.

Why the shopping frenzy?

Online sales of many product categories have increased, including for food, winter clothes and toys. This isn’t surprising given people still need to eat, winter is coming and we’re bored at home.

But beyond the fact most people are spending more time at home, there are a range of psychological factors behind the online shopping upheaval.

Recent months have been stressful due to financial uncertainty, the inability to visit loved ones and changes to our daily routines.

Shopping can be a way to cope with stress. In fact, higher levels of distress have been linked with higher purchase intentions. And this compulsion to buy is often part of an effort to reduce negative emotions.

In other words, shopping is an escape.

A 2013 study compared people living close to the Gaza-Israel border during a period of conflict with those from a central Israeli town that wasn’t under duress. The researchers found those living in the high-stress environment reported a higher degree of “materialism” and a desire to shop to relieve stress.

When mall trips aren’t an option

Indeed, in a time when typical forms of entertainment such as restaurants and cinemas are inaccessible, shopping becomes a form of entertainment. The act of shopping alone produces increased arousal, heightened involvement, perceived freedom, and fantasy fulfillment.

It seems the stress and boredom brought on by this pandemic has intensified our will to spend.

Another pleasant aspect of online shopping is it avoids the typical “pain of paying” experienced during in-person transactions.

Most people don’t enjoy parting with their money. But research has shown the psychological pain produced from spending money depends on the transaction type. The more tangible the transaction, the stronger the pain.

Interestingly, online shopping also allows high levels of anonymity. While you may have to enter your name, address and card details – no one can see you.

It’s easier to buy “embarrassing” products when no one is looking. Apart from lockdown restrictions making it more difficult to date, this may also help explain why sex toy sales have surged during the pandemic.

Sales of lingerie and other intimate apparel have also reportedly jumped 400%. 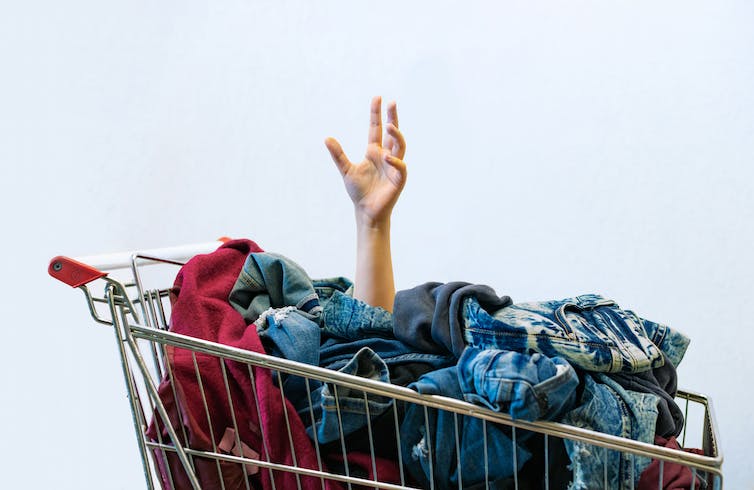 COVID-19 aside, shopping addiction (formally known as compulsive buying disorder) is a real disorder that may affect as many as 1 out of 20 people in developed countries. Shutterstock

How have businesses responded?

With advertising spend down, businesses have responded in different ways to recent changes in online shopping.

Many are offering discounts to encourage spending. Last week’s Click Frenzy became a central hub for thousands of deals across dozens of retailers such as Telstra, Target and Dell.

Others have moved operations online for the first time. If you scroll through any major food delivery app, you’ll see offers from restaurants that previously specialised in dine-in services.

Meanwhile, existing meal delivery services such as HelloFresh and Lite n’ Easy are updating their methods to guarantee hygienic packing and transport.

Even established brands are getting creative. For example, Burger King outlets in the US are offering free burgers to customers who use one of their billboards as a virtual backdrop during conference calls.

Unfortunately, with the ease of online purchasing, and our increased motivation to give in to improve our mood or seek entertainment, many people are now at risk of overspending and landing in financial stress.

It’s important to control spending during this fraught time. Simple ways to do this include creating a budget, avoiding “buy now, pay later” schemes, recognising your spending “triggers” and planning ahead.

As isolation increases materialism, it’s also important to keep in touch with family and friends, whether that’s in person (if allowed in your area), via video calls or phone.

So the next time you’re thinking of pulling out your credit card, why not get Skype up on the screen and play a virtual game of Pictionary instead?