The Olympics strive for political neutrality

The Olympics strive for political neutrality. So, how will they deal with surging athlete activism?

The International Olympic Committee (IOC) has long tried to insulate itself from politics in society, but wider issues have always been a part of sport - including the Olympics.

Sometimes political statements have been subtle and accommodated by the IOC, such as Cathy Freeman’s victory lap at the 2000 Sydney Olympics, with the Aboriginal and Australian flags draped on her shoulders — a symbol of hope for reconciliation.

The Olympics have, of course, also been subject to more confronting actions: Nazi salutes at the 1936 Berlin Games, political boycotts of the 1980 and 1984 Games and a terrorist attack at the 1972 Munich Games.

While the IOC advocates for political neutrality, the Olympics are inherently contested terrain — a celebration of athleticism and, by virtue of national teams, a stage for geopolitical triumphs and tensions.

Athletes are obviously individuals and, increasingly, many are seeking a voice on matters that transcend sport, such as racism and sexism. Last month, athletes used their collective power to bring every US professional league to a standstill for a day to protest the police shooting of a Black man.

In this new era of political activism, the IOC is being provoked to reevaluate its staunchly apolitical stance. Just how the movement will allow activism — in what forms and what types — remains a big question.

Read more: Athletes won't stay silent on politics anymore. But will leagues support their protests if it costs them real money?

At the centre of the debate is Rule 50 of the Olympic Charter, which purports to “protect the neutrality of sport and the Olympic Games”, stating

no kind of demonstration or political, religious or racial propaganda is permitted in the Olympic areas.

Protests and demonstrations are therefore forbidden at all Olympic venues and ceremonies.

As athlete activism has become more visible in recent years, the IOC sought to revise its guidelines around protests for the 2020 Tokyo Olympics.

Read more: Sit on hands or take a stand: why athletes have always been political players

This followed several medal podium protests by athletes outside the games, including Australian swimmer Mack Horton refusing to stand beside China’s Sun Yang at the world championships. 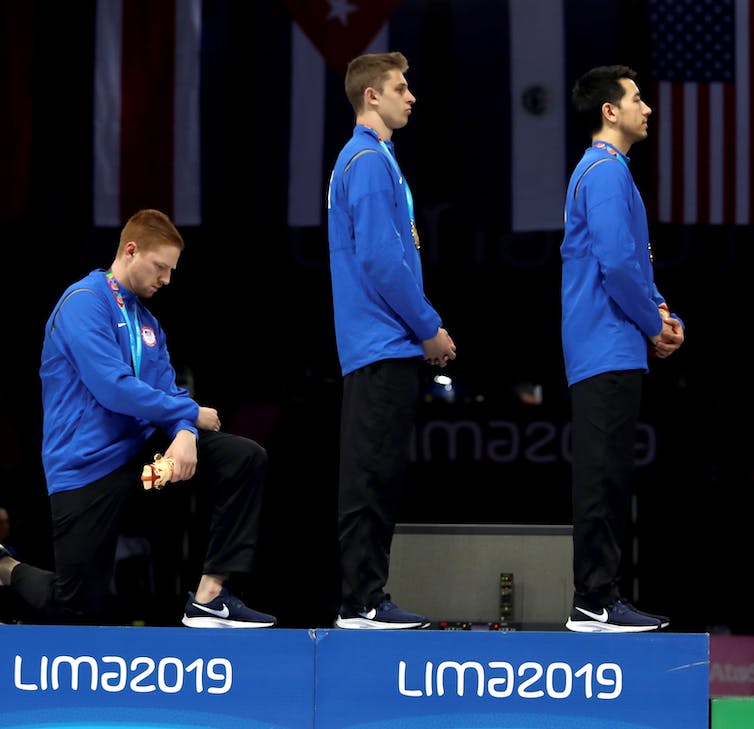 US fencer Race Imboden kneeling during a medal ceremony at the 2019 Pan American Games. Juan Ponce/EPA

The new guidelines are intended to set parameters for what is allowed and what isn’t. Olympic athletes are entitled to “express their opinions”, but not during competitions or at the Olympic Village, medal ceremonies and other official ceremonies. This is allowed elsewhere: press conferences, team meetings and social media.

So, on the face of it, athletes have more liberties: their use of social media, for example, is less constrained than in the past.

No clear line in the sand

As ever, though, the devil is in the detail. The new guidelines also outline what constitutes unacceptable dissent: displaying political messaging (such as signs or armbands), gestures of a political nature (hand gestures or kneeling) and refusing to follow ceremony protocol.

From the perspective of the IOC, there is a clear demarcation between what constitutes a protest and expressing one’s views.

But athletes have been left confused — and continue to feel constrained by the new rules. For example, the rule would seem to allow an athlete to express support for Black Lives Matter at a press conference — but not wear a BLM t-shirt. Is one considered an expression of solidarity against racism, the other a political protest? 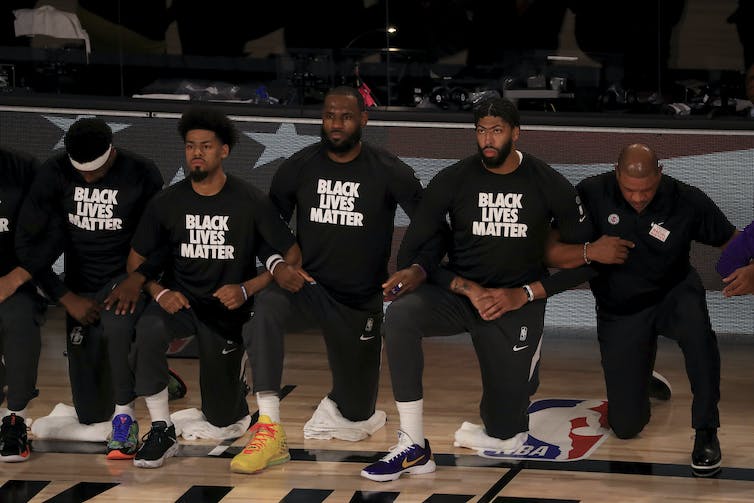 NBA players are now among the most vocal athletes in support of Black Lives Matter. Mike Ehrmann/AP

And what if athletes kneel or raise a fist during a medal ceremony — a very common form of protest in sports today? The IOC is asserting that actions like these will be punished.

Frustratingly, the revised guidelines are not only imprecise, the penalties arising from breaches are vague - to be decided on a “case-by-case basis as necessary”.

Of course, one must also consider the flip side. Freedom to speak on a global stage may also mean athletes advocating for causes that do not align with themes the IOC endorses, such as racial or gender equality.

As Chelsey Gotell, chairperson of the International Paralympic Committee’s athletes’ council, put it,

We all know that athlete protests at the games is something of a Pandora’s box. The last thing we want to do is create a free-for-all at the games where [Paralympic] athletes are free to protest on any subject they like, including ones the wider world will find repulsive.

Punishing or removing athletes who speak up

Perhaps not surprisingly, the revised guidelines have received a mixed reaction from athletes. Global Athlete, an alliance advocating for athletes’ rights, claims Rule 50 breaches article 19 of the Universal Declaration of Human Rights:

Everyone has the right to freedom of opinion and expression; this right includes freedom to hold opinions without interference.

Taking this cue, Canadian human rights lawyer and Olympian Nikki Dryden argues bans on protest constitute an unreasonable denial of freedoms, which should be vigorously resisted.

US Olympians have been especially outspoken, saying in a letter

The IOC … cannot continue on the path of punishing or removing athletes who speak up for what they believe in, especially when those beliefs exemplify the goals of Olympism.

In a slight departure from that view, an Australian Olympic Committee survey of athletes revealed most agreed with barring protests from competition and the podium, but there was an appetite for political expression beyond that. 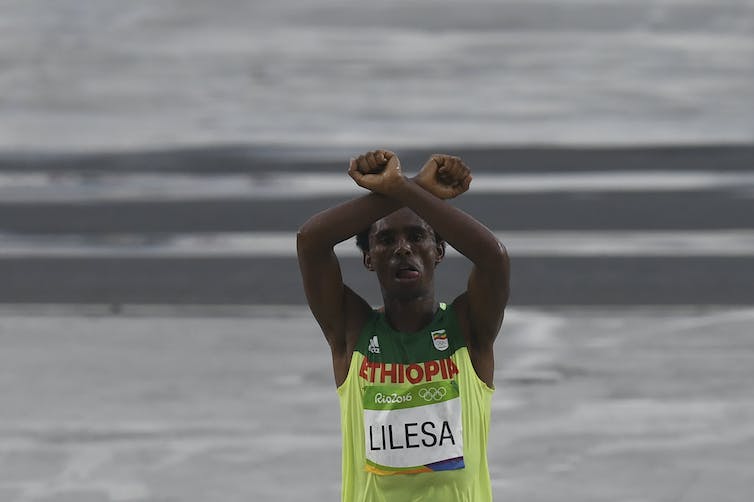 Feyisa Lilesa of Ethiopia makes a political gesture as he crosses the finish line in the 2016 Rio Olympics marathon. Lukas Coch/AAP

The Olympics as a force for positive change

The IOC Athletes’ Commission is now consulting with athletes globally on different ways Olympians can express themselves in a “dignified way”, with a recommendation on Rule 50 expected in early 2021.

Whatever the IOC decides, one thing is clear: the “athlete voice” is more potent than ever. The recent athlete support for Black Lives Matter is a case in point. Sport should be aligned with causes like the fight against racism.

The Olympics — like sport generally — can also be a place where advocacy actually leads to positive change.

For example, under Saudi Arabian law, women were once not permitted to participate at the Olympics. However, the IOC pressured the Saudi Olympic Committee to send female athletes to the Olympics, and in 2012 its ban on women competitors was lifted.

We only need to think back to Freeman’s victory lap at the 2000 Sydney Olympics as an example of the power of the Olympic stage to make a positive statement. Without this type of wider community engagement, sport has limited meaning. Freeman gave premium value to that Olympic moment — and other athletes can, too.